Kaeru-Tobi-Gyouji(蛙飛び行事:the ritual of hopping frog) was held at Kinpusen-ji temple(金峯山寺) in Nara Prefecture on July 7th. The ritual dates back over a thousand years.

Legend has it that an big eagle takes an irreligious man away to a bluff. A monk comes by just in time to help him out by changing him into a frog. A high priest turns him back to normal by reciting a sutra.

The ritual sticks to this legend.
Mikoshi (portable shrine) on which a person in a frog suit rides is carried through the city streets to the temple. He hops like a frog on the stage. After a monk recites a sutra, he takes off his suit, bow and greet in silence. 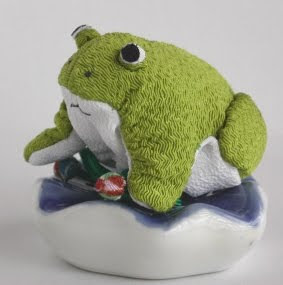 "Frog" is a seasonal word of spring in haiku.

やせ蛙 負けるな一茶 これにあり(小林一茶)
"A lean frog, don't lose, I'm on your side," written by Kobayashi Issa

He wrote this poem on seeing male frogs' competition for female frogs. He had his sickly baby in mind. But, his hope was dashed. His baby died in 30 days.
投稿者 ichinen 時刻: 11:12 PM