In Japan, the cicada is associated with the summer season.
Higurashi(蜩,茅蜩,秋蜩,日暮:evening cicada, Tanna japonensis) starts to sing in a nearby grove in mid-July, around the end of the rainy season. It sings at dawn and nightfall or in dark weather, so it is called higurashi which means nightfall. Ｉt is also known as kanakana (カナカナ) because it goes kana-kana. I heard it singing in the middle of the night last year.

Although it has been singing up to the middle of Semptember, another cicadas such as abura-zemi（油蝉:Large Brown Cicada), min-min-zemi（ミンミン蝉:Oncotympana maculaticollis) or tsuku-tsuku-boushi(つくつく法師,寒蝉:Meimuna opalifera）start to sing loudly in late July.
Recently, noisy kuma-zemi(熊蝉:Cryptotympana facialis) is increasing around Tokyo. It is thought to be causally related to global warming or transplanted trees.

Ancient Japanese people think that the distance sound of evening cicada is melancholy, and it has been featured in literature. When heard up close, its sound is quite noisy.
Evening cicada is a seasonal word of fall, but large brown cicada, min-min-zemi and semi-shigure(蝉時雨:the chirring of cicadas in chorus) are that of summer in haiku.

閑さや 岩にしみ入る 蝉の声 (「奥の細道」松尾芭蕉）
"At a quiet and empty temple in the deep mountain, a cicada start to sing, but its sound gets sucked into a rock," written by Matsuo Basho in "Oku no Hosomichi"

Oku no Hosomichi (The Narrow Road to the Deep North) is a travel diary including his famous haiku poems. It was published in 1702.
It's generally understood that the cicada in this haiku was nii-nii-zemi(ニイニイゼミ:Platypleura kaempferi). 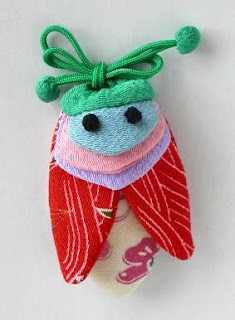 Its original work was made in the Meiji Period.

The word "utsusemi(空蝉)" comes from the word "utsushimi(現身,living person)". At first it meant "this world". Under the influence of Buddhism, it took on a different meaning, "fugacious this world".
Utsu(空) means vacuity, semi(蝉) does cicada. Finally, it also came to mean the exuvia of a cicada.

she and her brother were members of the imperial family, but he was executed as a rebel. She lamented over his death and made this poem.

"Manyo-shu(Collection of Ten Thousand Leaves)" was realized in the late eighth century and includes approximately 4,500 poems written by people from every walk of life from different regions of Japan over a period of about 300 years.
Its poets consist of a variety of persons such as emperors, aristocrats, commoners, people at the very end of the road, front-line soldiers, punished or executed persons and beggars.

Utsusemi is also the 3rd chapter's title of "The Tale of Genji" written by Murasaki Shikibu. Utsusemi was not beautiful but a daughter of an upper-class aristocrat and was supposed to become a court lady. she married a rural lower class aristocrat because of her father's death, and he was a much older husband.
Hikaru Genji once made her his own, but she threw her sheer coat on the floors and ran away from him. The coat looked like an exuvia.
she has refused to accept his love since then. Knowing her place, she no longer dreams of marrying a prince. In the end, she is supported by Genji financially after renouncing the world.
投稿者 ichinen 時刻: 11:07 PM