Yoshitsune and the Thousand Cherry Trees

From June 4th to 15th, the kabuki play titled "Yoshitsune Senbon Zakura (義経千本桜:Yoshitsune and the Thousand Cherry Trees) " is being performed at the Sadler’s Wells Theater in London. In the play, Ichikawa Ebizou(市川海老蔵) plays a fox disguised as a retainer of Minamotono Yoshitsune(源義経) named Sato Tadanobu(佐藤忠信).

Ichikawa Danjurou(市川團十郎), Ebizou's father, survived bouts with leukemia. Partly for that reason, he said he wanted to express parent-child attachment at the performance in London.

It's generally believed that this story doesn't appeal to the European people having a negative image of fox. Can it touch the hearts of the audience this time?
I heard that the exciting scene of the fox flying out over the audience using a technique called chunori appealed to the audience in London.


This play was written by Takeda Izumo Ⅱ(二代目竹田出雲), Miyoshi Syouraku(三好松洛)and Namiki Senryu(並木千柳). It was premiered as a bunraku play in 1747, as a kabuki play in 1748.

A tsuzumi drum(a hand drum used in traditional Japanese music) was made to do a ritual for rain. Its drumskins were made from a pair of 1000-year-old foxes which were parents of the fox in disguise. Its parent foxes were killed in its cubhood, so it couldn't be devoted to its parents. Although the fox had its wife and children, it was not giving up on seeing its parents.

Minamoto Yoritomo(源頼朝,1147—1199), the founder of the Kamakura Shogunate, is Yoshitsune's elder brother, but Yoritomo is driving Yoshitsune to his death.
Shizuka Gozen(静御前), Yoshitsune's mistress, goes to Yoshino where Yoshitsune escaped, being accompanied by the fox in disguise. The fox aims at the drum that she received from Yoshitsune.

When Shizuka and Yoshitsune meet again, the fox is exposed as an imposter. It reveals itself and confides feelings about its parents to them. When she taps the drum with her finger tips, the fox hears its parents' voice, "Don't afflict a loyal retainer by changing yourself into him. Go home early." The fox apologizes for deceiving them and shoves off.

They are deeply touched by its words and try to call it back by tapping the drum.
But the drum makes no sound.
Lingering farewell makes the drum lose its sound.

Yoshitsune is very impressed by their family love. Although he craved affection and acceptance from his brother, Yoritomo cast off Yoshitsune.
He give the drum to the fox that has come out of hiding. It hugs the drum for joy and flies out of sight. Then it shows its thanks by repeling an enemy.

Yoritomo, Yoshitsune and Shizuka were historical figures. They were hit with tragedies.
The Japanese audience laughs over its fox-like funny gesture, is impressed with its acrobatic movement and is moved to tears by its touching speech.

What does Yoshitsune have to do with the fox?
The fox is called "Genkurou-gitsune(源九郎狐)", and "Kitsune(or gitsune)" means fox. The Chinese characters "義経" for Yoshitsune can be read "gitsune" in Japanese. 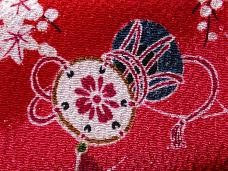