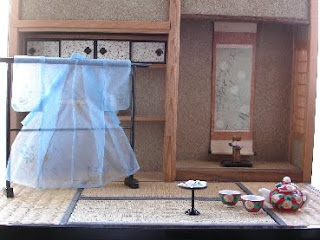 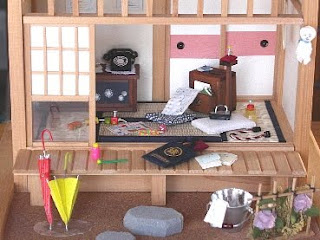 Tsuyu(梅雨:rainy season) is approaching.
It literally means "rain in the ume fruits season" and comes from Chinese(Chinese: 梅雨 méiyǔ). It's called tsuyu or baiu in Japan. 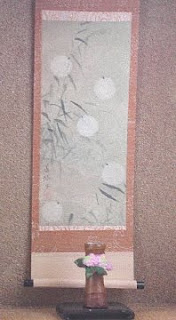 Hanging scroll with a painting of flashing fireflies and a vase of hydrangeas are placed in the alcove.

Hotaru-gari(蛍狩り) literally means "hunting for fireflies", but
actually means going out to see flashing fireflies. In the Edo period, Many people go out to see them when they began to appear at dusk. Now fireflies drastically have decreased in Japan because they can live only in clean rivers. So artificially-raised fireflies are released in many parts of Japan. However, it has become a problem in recent years because they are released into the places except their natural habitat.
The blink rate of fireflies is different in eastern and western Japan.
Its boudary happen to coincide with the Fossa Magna which is geological boundary of eastern and western Japan. 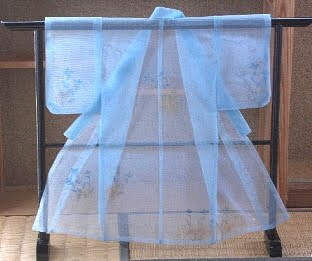 Kimono for summer is put on the hanging rack. This kimono is made from sheer fabric named ro(絽).
In the Heian Period, people in the Emperor's court updated their wardrobe on the 1st day of the 4th month and the 1st day of the 10th month in the lunar calender in imitation of a Chinese custom.
In the Edo Period, the Edo Shogunate institutionalized to change samurai warriors' clothes four times a year and commoners followed its custom.

Today, most school students change their uniforms on June 1st and October 1st, but kimono is changed four times a year.
Lined kimono is worn from October to May, unlined kimono in June and September, kimono made from thin fabric such as ro(絽) or sha(紗) in July and August.
They look like cool, but they are not so. Because it is necessary to wear an kimono-like garment under them. It is important to look like cool. The cotton yukata(浴衣) is an informal kimono in summer.

Teruteru-bouzu(照る照る坊主:"shiny-shiny Buddhist priest") is a doll to which Japanese children pray for fine weather. It is said that the doll have "bouzu(monk)" in its name because the doll's head looks like the shaven head of a Buddhist monk or monks prayed for rain. Its origin can be traced to a doll(掃晴娘:sǎoqíngniáng) in China. 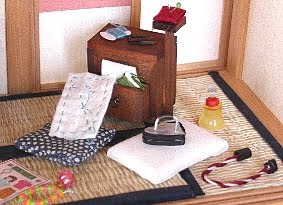 There are an old sewing table, a clothes iron and an uncompleted wiping cloth on the tatami mats. 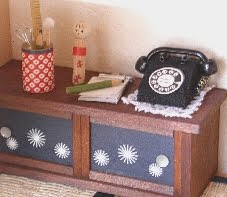 In the old days, all the telephones at home were black.
A Japanese bamboo ear pick with a down puff is in the pen stand.
Kokeshi, which is the traditional wooden doll made in the northeastern region of Japan, is next to the pen stand.
投稿者 ichinen 時刻: 11:04 PM