Yesterday was Father's Day, but it's pale compared to Mother's Day.
Many people are very interested in the World Cup soccer games now.
Hanashoubu(花菖蒲:Japanese water iris) are now at their peak.

Warnings of heavy rains and local flooding are issued for Kyushu now.

五月雨を 集めてはやし 最上川（「奥の細道」松尾芭蕉）
"Gathering as much early summer rain as possible, the Mogami River comes rushing down in a torrent", written by Matsuo Bashou (松尾芭蕉,1644–1694) in "The Narrow Road to the Deep North".


The Summer Solstice occurs around June 21st each year.
It is marked by the longest day and shortest night of the year.

夏の夜は まだ宵ながら 明けぬるを 雲のいづこに 月やどるらむ(「古今集」清原深養父)
"Summer nights are short, so I felt that dawn succeeded night during the early evening. Where in clouds does the moon spend night?", written by Kiyohara no Fukayabu(清原深養父), Sei Shounagon's great-grandfather.


五月闇 短き夜半の うたたねに 花たちばなの 袖に涼しき(「新古今集」慈円)
"When I am dozing off at a short night in the rainy season, wind carries the smell of tachibana(橘:Citrus tachibana) and makes me feel the cool air through my sleeves", written by Jien(慈円,1155–1225), who was a Japanese poet, historian and Buddhist monk. 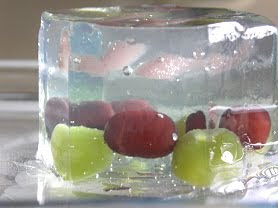 Seiryu(清流:limpid stream)
Sweetfishes are swimming in the limpid stream, and beans are used to resemble stones in the riverbed.
投稿者 ichinen 時刻: 11:24 PM