In 1979, Japan Wagashi Association declared June 16th "Japanese Confectionery Day" modeled after the event named Kajou(嘉祥).
The event had been held on the 16th day of the 6th month in the lunar calendar.

The origin of the event can not be traced, but it had been already held by samurai warriors and aristocrats in the Muromachi Period(1338-1573).
In the Edo Period, it became common among commoners to buy confections for the 16 ancient Chinese coins named kajou-tsuhou(嘉定通宝).

Another theory suggests that the event started because Emperor Ninmyou(仁明天皇, 810-850) created the new era named kajou(嘉祥) and offered confections to the gods to pray for aborting an epidemic and people's future health on the day in 848.
After the Meiji era, the event died out completely.

We can buy kajou-gashi or kajou-manju(嘉祥饅頭）,which is also a confection for the day, only at Toraya. But they will be available for a limited time only.

It is not known when Toraya(虎屋) was founded, but it's thought to be founded in the 1520s. Toraya had been a purveyor to the Imperial Household since the latter half of the 16th century and has the sample book written in 1695. It moved its headquarters from Kyoto to Tokyo when the emperor moved from Kyoto to Tokyo.
It has branches in New York and Paris and gave Japanese confectionery classes for beginners in Paris last year. 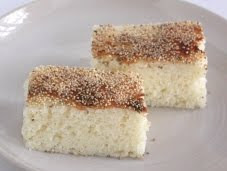 Miso-matsukaze(味噌松風)：
steamed cake containing wheat flour, sugar and miso. Miso(味噌) is a fermented food that is made from soy beans mixed with salt and the fermentation agent called koji.

Matsukaze(松風) means the wind blowing through pine groves. people were desolated to hear the sound of the wind. The word "Ura-sabishii(うら寂しい)" can be read in two ways, "desolate" and "the reverse side is not decororated". The confection is topped with poppy seeds and only its upper side is browned.
Matsukaze is an autumn cofection.

Kameya Mutsu(亀屋陸奥), which is a Japanese confectionery shop and founded at Kyoto in 1421, created a confection named matsukaze(松風)
by Saint Kennyo(顕如上人) as a preserved food for The Ishiyama Hongan-ji Temple(石山本願寺). Because the temple faced a serious food shortage due to the 11-year battle with Oda Nobunaga(織田信長, 1534-1582), who was the initiator of the unification of Japan.
As an aside, Nobunari Oda(織田信成), who is a Japanese male figure skater and reached seventh place at the Vancouver Olympics in 2010, is the 17th direct descendant of Nobunaga.

There are various views on the origin of Miso-matsukaze. The recipes vary by store.

Musashino(武蔵野)and Genjimase(源氏籬) is a combination of kourai-mochi(高麗餅) and yokan(羊羹). Kourai-mochi is made by mixing sweet bean paste with rice flour, passing it through a coarse sieve, drying and steaming it. Yokan is a thick jellied confection made of azuki bean paste, kanten and sugar.

It is said that Kourai-mochi was brought to Japan by Korean captive potters when Toyotomi Hideyoshi invaded Korea. Kore-mochi known as a specialty of Kagoshima is close to the originals. 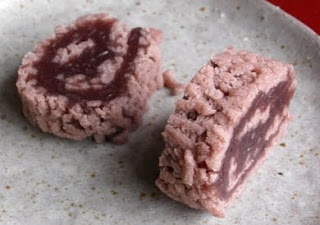 This is kourai-maki(高麗巻), which is a combination of kouraimochi and yokan. It's like a Swiss roll.
投稿者 ichinen 時刻: 11:56 PM