The events to purify people from half-year's worth of sin had been held on the last days of the 6th month and the 12th month in the lunar calendar.

One of them, named Nagoshi no Harae(夏越祓), is held on June 30th in Kyoto now. At the event, Chinowa Kuguri(茅の輪くぐり) is held at many shrines. It is also held at the shrine near my house.
People purify them by going through a large loop made of Imperata cylindrica(cogongrass) or Miscanthus sinensis (Susuki grass).

Ice had been cut out in the northern part of Kyoto as a tribute to the Emperor and had been carried to the Imperial Palace on the 1st day of the 6th month in the lunar calendar. This event was called Himuro no Sekku(氷室の節句). Himuro literly means ice room. 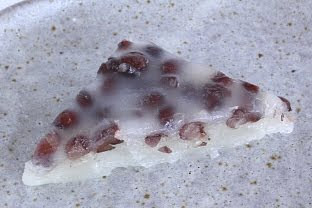 On this day, people in Kyoto eat a confection named Minazuki(水無月), which is cut into a triangle to the semblance of ice chip and is topped with azuki beans to pray for good health.
投稿者 ichinen 時刻: 10:37 PM