Happy New Year! May the New Year bring many good things to you. 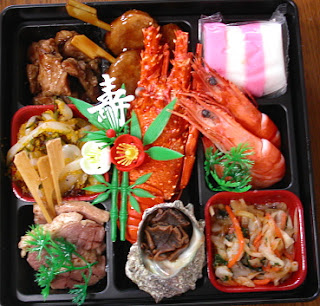 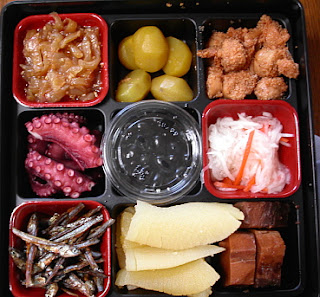 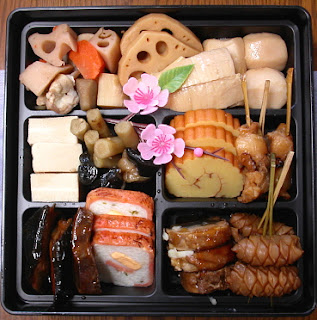 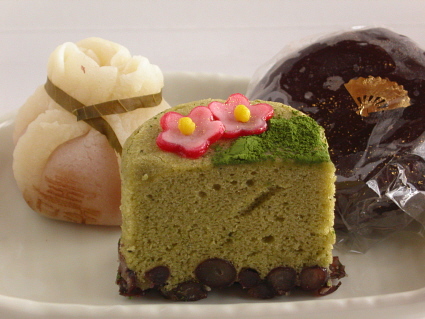 confections for the New Year:
"Fukubukuro(lucky bag)" on which the character "寿" is written, "Hatsu-hinode(the first sunrise of the year), Shochikubai (pine, bamboo and plum trees)

According to the Chinese zodiac, 2013 is the year of the Snake. Most people don't have a good image of a snake.
In Japan, it has also been worshipped as the deity of fertility and the deity bringing rain since long ago.  The white snake was considered a messenger of the Hindu goddess Saraswati whose Japanese name is Benzaiten (弁才天, 弁財天). It is believed that it brings economic fortune.


Omiwa Jinja Shrine(大神神社) in Nara Prefecture is one of the oldest shrines in Japan. Its enshrined deity is Omononushi-no-okami who is transformed from a snake and is considered to bring forth clouds and rain. So eggs, a favorite food of snakes, are offered to the deity. When I visited the shrine with a friend a long time ago, a small snake came with the aim of an egg. Then an elderly woman near me started to fold her hands and worship the snake. I was amazed.
We stayed at an inn located on the shrine's grounds and visited the shrine in the early morning. Many local worshippers payed their respects at the shrine. They were pious.


The shrine is not equipped with Honden (main shrine). Mount Miwa linking to the shrine is believed to contain the spirit of the deity. Visitors directly worship the mountain at Haiden (a hall of worship). I thought I understood why ancient people worshipped the mountain. It had a distinct personality.

I highly recommend walking along a path named Yamanobe no Michi(山の辺の道) including Omiwa Shrine, Isonokami Jingu Shrine (石上神宮), Chogaku-ji temple(長岳寺). It's an ancient route connecting the foots of some mountains in Nara Prefecture.

Isonokami Shrine has a long history and appears in the oldest history book "Kojiki" （712 AD） and in "Nihonshoki". When visiting the shrine in the off-season, there were no visitors. A priest explained "Kotodama(言霊)" fully.  Kotodama was usually the spiritual power believed to be contained within words in Japan.

We walked the route in early summer and ate Miwa Soumen(三輪素麺) at Chogaku-ji temple along the path. It's probably one of the best-tasting somen I've ever had.