Japanese women writers from a thousand years ago

Utakai Hajime (歌会始, Imperial New Year's Poetry Reading) was held at the hall named Matsu-no-Ma(松の間) of the Imperial Palace on January 16. The reading of traditional tanka poetry is convened by the Emperor.  This year's theme was "ritsu(立)" and next year's theme is "sei(静)". "立" literally means "stand", but this character is used in various idioms. This ceremony includes only chants of traditional tanka poems.

In connection with this ceremony, I am going to introduce several waka poems of Japanese women writers from a thousand years ago.  In the Heian period(794 to 1185), many women were active as writers although they were not professional writers. 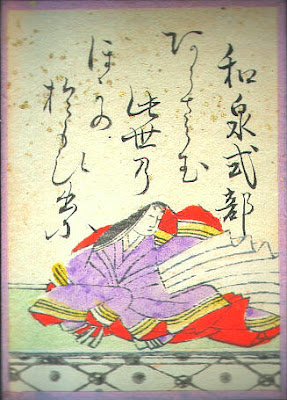 "I am going to die soon. As a memory to take to the afterlife, I am eager to meet you again."

She also served to Empress Shoshi as a lady-in-waiting and was known as a woman with many love affairs like her mother. She died in childbirth in her 20s.

"One must cross over Mount Oe and pass through Ikuno before reaching Tango.It's a long way, so I haven't been to Amanohashidate yet. (I haven't received a letter from my mother.)"

Rumor had Izumi Shikibu ghostwrote for her daughter. A nobleman told her mockingly, "Did you send a messenger to Tango to ask your mother to ghostwrite a poem?" Izumi Shikibu was in Tango area. She replied to him with an excellent poem. Amanohashidate(天橋立) has long been known as one of famous viewing spots in Tango(current an area in Kyoto). 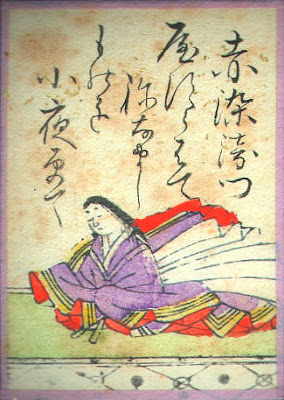 "If I had known you wouldn't come, I would have gone to sleep immediately. The night fell and I saw the moon setting in the west (while waiting for you.) "

Akazome Emon(赤染衛門, c.956–1041) was also one of Murasaki Shikibu's colleagues. Murasaki shows her veneration for Akazome Emon in her diary. Akazome Emon was happily married and also had interactions with Sei Shonagon.


Eiga monogatari (栄花物語, A Tale of Flowering Fortunes) describes the lives of Fujiwara no Michinaga and his family. It is believed to have been written by a number of authors. Akazome Emon is thought to have written the first thirty volumes. This tale was written entirely in kana(Japanese syllabary characters). It was a history tale by women and for women.

Double-flowered cherry blossoms from Nara were presented to the Emperor. Although Ise no Taifu(伊勢大輔, c.989-c.1060) was a newcomer, she was chosen to receive the blossoms. Her predecessor was Murasaki Shikibu. She made up this poem on the spot by order of Michinaga. 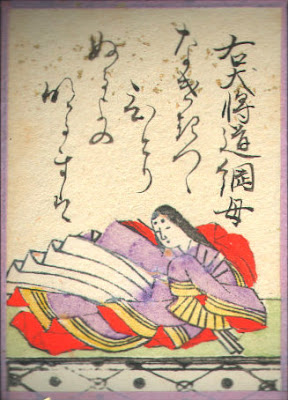 "I spend lonely nights alone crying over you. How could you know how long the nights are?"

Michitsuna no haha /Udaisho Michitsuna no haha(右大将道綱母, c.935-995) was one of Fujiwara no Kaneie's eight wives and was Fujiwara no Michitsuna's mother. She is said to have been wondrous beautiful. She is famous as the author of the Gossamer Years(蜻蛉日記,Kagero Nikki). It is considered a forerunner of the women's diary genre, and greatly influenced the Tale of Genji.

Kaneie approached her enthusiastically, but he got tired of her soon. Her husband had his official wife and many mistresses. The form of marriage in those days involved commuting relationships.
She composed this poem shortly after she gave birth to Michitsuna around 20 years of age, in 955. She was furious when she found out he had taken another mistress. One day, He visited her for the first time in quite a while. He asked her to open the gate, but she didn't open it. He felt offended and went home.she sent him this poem with a withered chrysanthemum flower.

She was a jealous and temperamental woman. She resented her husband, was jealous of his official wife and loved her only child. She was far below Kaneie socially, so her son's promotion was delayed. Kaneie's official wife gave birth to powerful brothers, Fujiwara no Michitaka and Michinaga.

The following year, she adopted a girl between Kaneie and another woman. She moved outside the city and lost access to him. Her diary ended at around the age of 40. She died 20 years later, in 995.

In fact, she and Kaneie spent New Year's Day together every year until around 970. When she secluded herself at Ishiyama-dera, he joked to amuse her. Her sister laughed hugely, but she stopped herself from laughing. She was good at sewing. He sent her rolls of cloth before major events, and made her make formal costumes.

He was a member of the Fujiwara family with power, and took over a leadership position. Nevertheless, her diary were widely read among nobles.

We learn about classical Chinese and Japanese literature in high school. This diary appeared in my school text book. For high school students, this diary might be more suitable than other ones. I thought it was a tedious story in high school. I was only interested in erupting Mount Fuji in the diary. Now I feel close to her unspectacular life.

She grew up at her father's post, in Kazusa(current central Chiba Prefecture).  At the age of 13, his father finished out his term and she went to Kyoto in the company of him. She lost a sibling, got hooked on the Tale of Genji and other stories, served as a lady-in-waiting at the Imperial court, got married at around the age of 33, gave birth to three children, sought solace in religion, and lost her husband at the age of 51. Her diary ended at the age of 52.


Ki no Tsurayuki (紀 貫之, ?-945) was a famous male poet. He wrote the Tosa Diary in kana characters pretending to be a woman.  It's a story of travel from Tosa(current Kochi Prefecture) to Kyoto. It had great influence on the development of women's literature.
投稿者 ichinen 時刻: 11:07 PM