Ogura Hyakunin-isshu used in the karuta competition is a famous poetry anthology and contains one hundred waka poems by hundred poets including Murasaki Shikibu (紫式部, c.970 or 973-c.1014 or 1025), Sei Shonagon(清少納言, c.966-1025).  The Tale of Genji was written by Murasaki Shikibu.
Sei Shonagon is also famous as the author of "the Pillow Book(枕草子, Makurano Soshi)."

"If you say cock-a-doodle-doo before daybreak in order to deceive a gatekeeper(me) , the gate of a checkpoint will not open (I will never meet you.)"

This poem is based on a story in the Chinese ancient history book, the Records of the Grand Historian(史記.)

A poet's name and only the first phrase was written on the karuta card until the end of the Edo period.

When starting to serve as a lady-in-waiting to Empress Teishi at the imperial court around 993, Sei Shonagon was a divorced mother with a son. Empress Teishi's father, Fujiwara no Michitaka, had held power but died of illness in 995. His younger brother, Fujiwara no Michinaga, arrived in power. Michinaga used every available means to hold on power. Teishi's position became precarious when she lost the backing of powerful figures. Although she gave birth to a son in 999, she died in childbirth in 1001.

Shonagon abandoned her service at the court shortly after the empress's death. She got married again and gave birth to a daughter who served as a lady-in-waiting to Empress Shoshi later. She had interactions with some acquaintances including Izumi Shikibu, Akazome Emon after she left her position. From an Akazome Emon's poem we can see that she lived in her father's former dilapidated home in her later years.

It is thought that she started to write the Pillow Book around 996 and finished it between 1001 and 1010. It was the hardest time for Teishi and her, but her book tells on a happy note.

"It had been a long time since we had met, but you returned home as soon as I recognized you. You are like the moon late at night. It soon losts itself in the clouds."

This is a poem about a childhood friend who had not seen her for a while.
The friend came to say goodbye to her at the end of autumn before going far away. Her childhood friend probably accompanied her father(or husband) when he left for his new post.


Shikibu's father, Fujiwara no Tametoki(藤原 為時), was a mid-ranking aristocrat. He was a waka poet as well as a composer of Chinese poems. he was an antisocial person. Shikibu lost her mother in her infancy. Her father lost his position at the court, but his major source of income were his territory. He focused his efforts on her education. She learned the study of the Chinese classics.

In her late 20s, she got a proposal from a friend of her father's.  He had a son older than her and some mistresses.  She felt reluctant to marry him.  She accompanied her father when he left for his new post.  He continued approaching her while she stayed in the country. She spent only one year there.  After returning to Kyoto, she married him in 998.

The typical aristocratic lady in those years would marry in her mid-teens. There is one theory that it was her second marriage, but no evidence has been found to prove the hypothesis.

She gave birth to a daughter in 999, but her husband had entirely ceased to show up at her home. The form of marriage in those days involved commuting relationships. In addition, her husband died only three years after their marriage in 1001. His death left her in a daze. She felt insecure about her future.
After her husband's death, she started to write the tale to dispel the anxiety over her future and showed it to her friends. The tale became greatly talked about among people.

She started to serve as a lady-in-waiting to Teishi's rival and co-empress, Empress Shoshi in strong demand from Michinaga around 1005. The empress had several literary ladies-in-waiting.
Her colleagues included Akazome Emon(赤染衛門, c.956–1041), Izumi Shikibu(和泉式部, c.976- ?), Ise no Taiu(伊勢大輔, c.989-c.1060.）

Empress Shoshi gave birth two sons in 1008 and 1009.
Some say she became mistress to Michinaga during her service. The truth cannot be known.
It is generally believed that she finished the Tale of Genji and the Diary of Murasaki Shikibu in 1010.
She attended the imperial court at least until 1013.

In contrast to outgoing Sei Shonagon, Murasaki Shikibu was a reflective thinker. They were not acquainted, but Shikibu reckoned Shonagon as a rival. In the Tale of Genji, Shikibu criticized Sei Shonagon implicitly.

In the tale, Murasaki Shikibu says that the winter bright moon casting a beautiful light over the snowy landscape is not far behind from spring flowers and autumn leaves. The autumn moon has been praised since ancient times. The winter moon wasn't thought to be worth viewing, but it came to be praised.
This text invoked a poem by Sei Shonagon's father. He was a famous poet and praises the winter moon in his poem, but his daughter says the moon in the 12th month is tasteless in her Pillow Book. However, the description of the moon in the 12th month doesn't appear in the currently existing Pillow Book. (The 12th month in the lunar calendar corresponds approximately to January in the Gregorian calendar.)

"Sei Shonagon is very arrogant. She thinks herself so clever and litters her writings with Chinese characters, but when you look at them carefully you will find many errors. Those who want to behave as if they were superior to others will lower their reputation. Will their future be brighter?"

Talented women evoked envy and were greeted with hostility by many people.
It was common for men to read and write in Chinese characters, so most people have hard feelings toward a woman who could read Chinese classics. Shonagon expressed her talent openly. Due to the influence of medieval thought that talented women lead to misfortune, lots of anecdotes about Sei Shonagon's reduced circumstance were left behind.

Shikibu was concerned about what other people think of her, and she tried not to stand out. She was unwilling to serve at court.
However, she had a sense of humor. The Tale of Genji contains some humorous episodes. She had capacity for detached observation. Sometimes she sees things through men's eyes in the tale.
Some people say Shikibu had it in for Shonagon because she wrote something bad about Shikibu's husband in the Pillow Book.
Shonagon said nothing about Shikibu. She may not have been able to criticize Shikibu who was a MIchinaga's  favorite. 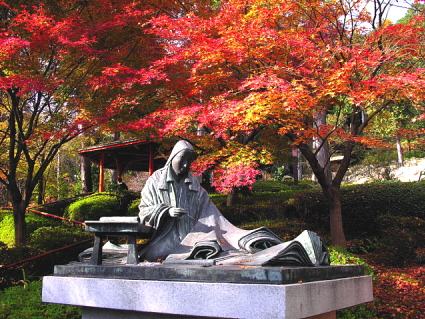 the statue of Murasaki Shikibu at Ishiyama-dera Temple in Shiga Prefecture:

According to legend, Murasaki Shikibu started writing the Tale of Genji or got ideas for it at the temple.