the opening of renewed Tokyo Station and China's National Day

The station's renewed Marunouchi-side building opened on October 1st.
Tokyo Station opened in 1914. The building was built as a three-story brick building with steel frames. Ten thousand pine stakes were driven into the ground of the building and had supported it. Natural slate from Ogatsu, Miyagi prefecture was used to cover its roofs.

The brick building received little damage from the the Great Kanto Earthquake in 1923. However, it was burned due to the great Tokyo air raid in 1945 and lost its roofs including two domed ones and floors. After the war, the building was imperfectly repaired.

It has been restored to original state. Its third-floor part and domes have been revived. The pine stakes were removed, and the antiseismic reinforcement of the building has been completed. Natural slate from Ogatsu was used for roofing again. Although the tsunami hit Ogatsu on March 11 in 2011, about 70% of the scheduled quantity was sent to Tokyo. People picked through the debris for slate plates, removed the mud from the plates with well water and picked out uncracked ones.

The Tokyo Station Hotel with 150 rooms has occupied most of the second and third floors. The royal suite costs 800 thousand yen a night. 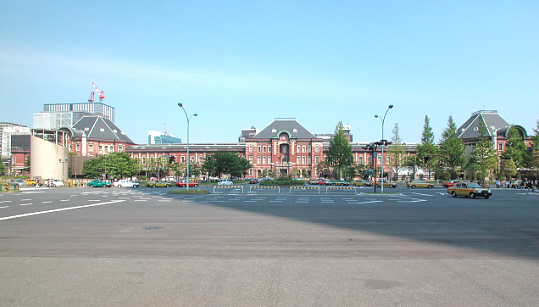 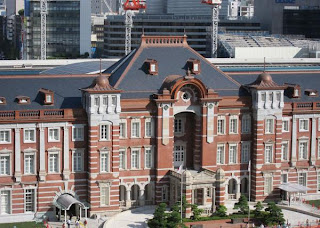 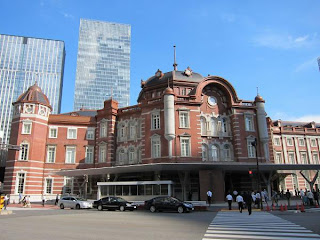 Even so, the traditional custom called "cai ching" (採青) was performanced as usual. Four lions split up to visit all of shops in the town, danced in the doorway, and snapped at a red envelope hung under eaves. The envelope contains gift money and is tied to green leafy vegetables such as lettuce. Originally, gift money was wrapped in green leafy vegetables.  The lion dance is believed to bring good luck and fortune to the business.

An exchange party and a celebration were held to commemorate the 40th anniversary of the normalization of diplomatic relations between Japan and China in the town although both the China's Ambassador to Japan and the governor of Kanagawa Prefecture refused to yield at the celebration.
Several movies from China, Hong Kong, and Taiwan are being shown in the town now.

All these events in the town ended without incident. The townspeople were relieved.  Many people were disappointed not to see the parade and visitors seemed not to worry about security.