Hote-matsuri(帆手祭) is a festival held at Shiogama Jinja Shrine(鹽竈神社) on March 10th in Shiogama City, Miyagi Prefecture. The festival started to pray for fire prevention after a big fire of Shiogama in 1682. 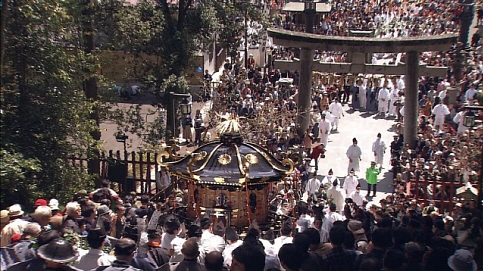 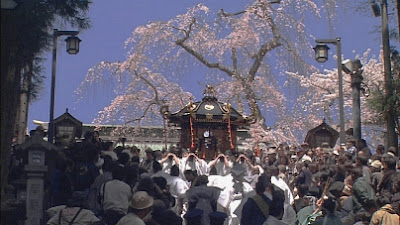 It snowed during the morning and rained in the afternoon in Shiogama today. I heard the festival received TV coverage. 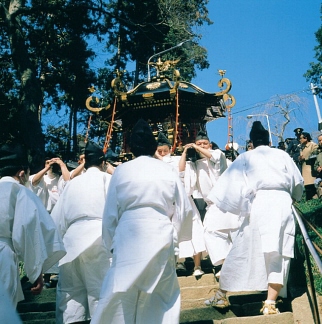 The highlight of the festival is when 16 carriers go down the steep flight of 202 steps with one ton of mikoshi(portable shrine) on their shoulders.

Mikoshi will leave the shrine at half past noon, go through the town with attendants and children in traditional attire and go up the stairs at 8 p.m. 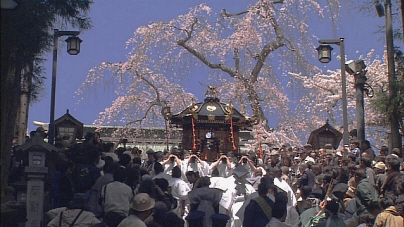 The festival was snowed off two years ago.
On March 9th of last year, the earthquake with a seismic intensity of a lower 5 on the seven-point Japanese scale occurred off the Sanriku coast. The tsunami due to the quake washed away farming rafts of wakame seaweed and oysters. There were some aftershocks. 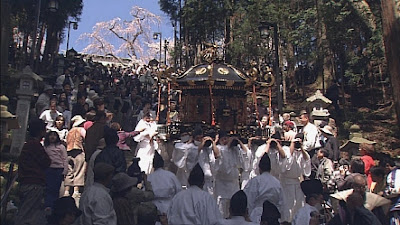 In that situation, the festival was held in the snow last year.
Mikoshi got stuck at a part of the course that it could usually pass through without difficulty. A visitor said he had an ominous presentiment.

Okama Jinja Shrine(御釜神社), a subordinate shrine of Shiogama Jinja Shrine, has four sacred cauldrons that is said to change the color of water in them when something extraordinary happens. A live-in caretaker of the shrine said she saw subtle color change in the two of the four cauldrons on March 11th last year.

On the day after the festival, the massive earthquake and tsunami attacked Tohoku Region. In Shiogama City, 31 people were killed and one is missing.  The town of Shiogama had relatively little damage. It is thought small islands in the Matsushima bay served as a buffer for tsunami as is the case in Matsushima.

﻿
﻿
A religious service to make Moshio(seaweed salt) is held at Okama Jinja in July.
Tanrokuen(丹六園) established in 1720 was a Japanese confectionary shop near Shiogama Jinja. The shop has been making and selling a confection named Shiogama(志ほが満) modeled after Moshio since the middle of the Edo Period.


Shiogama(しおがま) is a type of soft rakugan (落雁) and contains rice flour, sugar, salt and red shiso (Perilla frutescens). Now this confection is made and sold in various areas.

The tsunami rose to a level of 1.2 meters above the floor at the shop. The shop owner took visitors to Shiogama Shrine for safety in his car shortly after the massive quake.

The ground floor of the shop was covered with mud and rubble, but everyone was all right. There were the instruments for exclusive use and old documents on the second floor of the shop, so they were found intact. The shop reopened.
投稿者 ichinen 時刻: 11:12 PM