Boxed Hina dolls called Hako-bina(箱雛) were made in Chikugo area including Chikugo-Yoshii(筑後吉井), Yame(八女) in Kyushu Region. Some people say it started when wealthy people brought hina dolls home from Kyoto after placing them in a box and displayed boxed dolls in the Edo Period.


Raised cloth pictures called okiage(おきあげ) in Chikugo area are displayed together with hina dolls. Female samurai family members made the pictures as a side job in the Edo Period. They became common in ordinary houses after the Meiji Period.

﻿Padded pictures of hina dolls, kabuki actors and characters from fairy tales used to be made in Mizusawa(水沢) in Iwate Prefecture until around 1930. They are called Kukuri-bina(くくり雛) and date back to the Edo Period. ﻿ 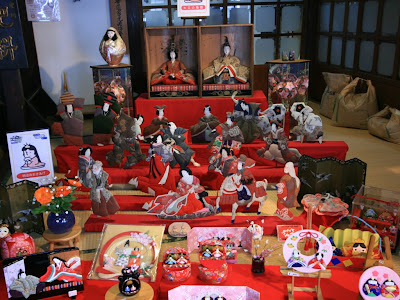 
Famous examples of hanging ornaments for the Doll Festival include Sagemon(さげもん) in Yanagawa City in Fukuoka Prefecture, Tsurushi-kazari(つるし飾り) in Inatori area in Shizuoka Prefecture and Kasafuku(傘福) in Sakata City in Yamagata Prefecure.
The ornaments include drawstring pouches, paper and fabric ornaments in the shape of various auspicious objects.

Tsurushi-kazari at the Associa Hotel in Nagoya

At Sagemon Meguri  in Yanagawa, people dressed like hina dolls and children in traditional attire parade on the water in March every year.
The parade will be held on March 18th this year.

kimekomi doll(木目込み人形) Head and body of a kimekomi doll are formed by placing mixture of paulownia wood powder and natural glue in wooden molds. The doll's body is grooved. Pieces of cloth for costume are tucked into grooves in the body.
﻿﻿﻿

This old hina doll is the same as my grandmother's.
投稿者 ichinen 時刻: 11:14 PM