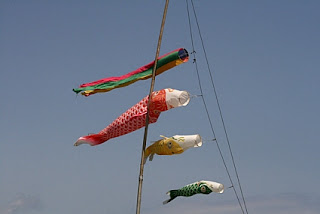 In the Edo Period, samurai families with boys flew their family banners and commoners with boys hoisted carp streamers. 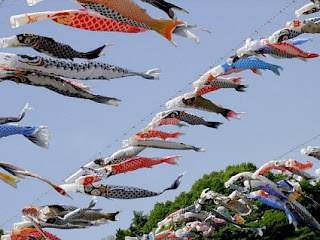 Recently, a troop of streamers are put up in many areas. Lesser people hoist standard-sized carp streamers and many streamers have sat in closets for a long time.

A village in Kochi prefecture started to gather those streamers and hoist them over the Shimanto River (四万十川) which is referred to as "the last clear stream of Japan".
﻿
﻿﻿

Kite-flying was done as an event to celebrate Tango no Sekku(now the Boys' Festival) in some areas during the Edo Period.
﻿﻿Large kites fly in Zama in Kanagawa Prefecture and kites compete against other towns' ones in Hamamatsu in Shizuoka Prefecture. A kite tries to bring down another kite by cutting its string by friction. Kites competition is held as Hamamatsu Festival every year, but the festival was cancelled this year.﻿﻿
投稿者 ichinen 時刻: 10:57 PM