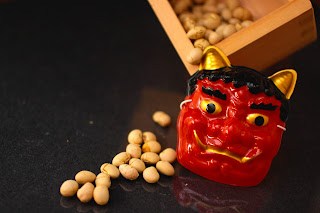 People throw roasted soybeans while shouting "Fuku wa Uchi, Oni wa Soto(Fortune in and demons out)" to ward off evil spirits and attract good fortune. The thrower of this event used to be the master of a family or a man called Toshi-otoko who was born in a year with the same sign of the Chinese zodiac as the current year. People eat the same number of beans as their age, wishing for health.

﻿
﻿
At many Buddhist temples and Shinto shrines, the throwers are men and women who were born in a year with the same sign of the Chinese zodiac as the current year. People try to get beans thrown from them.

In ancient times, this event comes from an annual ceremon called Tsuina(追儺) that was held in the Imperial Court on New Year's Eve in the lunar calendar. At some temples, tsuina is held to ward off demons in early January.


At first, monks read a sutra aloud or burn small pieces of wood on the altar to invoke divine help. Several demons dance and hold the ceremony to cut rice cakes(kagami-mochi). At last, pieces of rice cakes are thrown to visitors.

Seven demons appear as messengers of the god, burn disasters with burning torches, strike misfortunes with swords, purify the country, pray for the safety of people and for good health and celebrate the coming spring.

﻿
﻿
Demons pat visitors on the head.


﻿﻿
﻿﻿
People living in the Kansai region eat uncut rolled sushi called Ehou-maki(恵方巻き) in silence for good luck, while facing in the year's auspicious direction (north-northwest this year). This custom has been rapidly spreading in other areas. I also ate this sushi.


People in the Kansai Region eat grilled sardines on this day. Some people put up small decorations of sardine heads and holly leaves on their house entrances. Because spiky leaves of a holly stick into the eyes of demons and smoke and smell pouring from griled sardines ward off demons.


The word "oni(鬼)" is usually translated as "demon".
The word "鬼" originated from ancient China, but its meaning varied from the original. Oni was originally believed to be an invisible being that puts a whammy on people.

According to old Japanese literature, oni gazed at a funeral procession of an empress, walked through the town of Kyoto and infested even the Imperial court to maneat.
Some people say that oni were humans including antigovernment force, conquered native tribes and people who were shut out of the social system.
Now oni came to be portrayed as humorous.
In the 6th chapter of "The Tales of Ise", the lover of Ariwara no Narihira(在原業平) is eaten by oni. In fact, it is said that Narihira was separated from his lover Takaiko(高子) by her brothers. Because she was very noble and was considered appropriate for a concubine of an emperor. Later she became an empress dowager. Narihira bowed before authority and couldn't openly profess his hatred for her brothers.
The writer of the story says, "They are called oni(それをかく鬼とはいふなりけり)" He expresses Narihira's deep regretfulness with the word "oni."
"Red Demon cried(泣いた赤鬼, Naita Aka-oni)" was written by Hirosuke Hamada(浜田 廣介, 1893-1973) who was a children's literature writer and was originally printed in 1965.

This story is for children, but it makes a durable impression on its reader whether he is a child or not.
In the late 1910s many foremost writers and poets published their works for children. Although their works tell stories in simple terms, critics said they were profound books for children. Many of Japanese children's books don't have a happy ending.
The movie based on this story was released last year.
The play "Red Demon(赤鬼, Akaoni)" has been written and directed by Hideki Noda(野田秀樹.) We associate red demon with "Red Demon cried." The play was also performed in Thailand and the United Kingdom.