Making washi paper is held in winter after plants used as raw materials are harvested from autumn to winter.

An exhibition showed Rembrandt's 30 prints on Japanese washi paper last year. He used a type of Japanese washi paper called ganpi-shi(雁皮紙) for his 80 prints around 1647. The non-Catholic Dutch were allowed to maintain trade relations even during a period of national isolation. So washi papers were also exported to the Netherlands.
Many of today's Japanese copperplate engraving artists use ganpi-shi.

Ganpi-shi is made from the bark of ganpi(雁皮, Diplomorpha sikokiana). It was called "pearl paper" because it is thin and smooth-faced. Since ganpi is difficult to cultivate, we have to depend on wild ganpi trees. So real ganpi papers are rarely offered in markets.
Now most "ganpi-shi" papers contain another materials for washi such as kouzo(楮) and oriental paperbush(三椏, mitsumata). 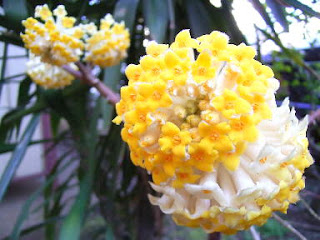 Its bark is used as the material of Japanese banknote paper even now. Because it is wrinkle-resistant, takes ink well and is not nearly damaged by worms. 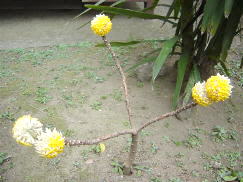 Japanese banknotes do not disintegrate when washed, so many wet notes were brought to the Bank of Japan in tsunami-hit areas. The bank's staffs washed muddy, oily or salty notes by hand and dried them.

Mitsumata(三椏) means three-way fork. The tree is called so because each branch of the tree divides into three branches.
﻿
﻿
Kouzo(楮, Broussonetia kazinoki × B. papyrifera)

Kouzo belongs to the mulberry family. 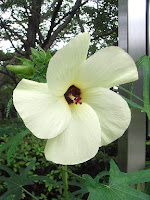 This plant is called tororoaoi(黄蜀葵) in Japan. Extracts from the root of aibika is used to make washi.


﻿﻿﻿﻿
﻿﻿﻿﻿ Washi paper has been made throughout Japan. Most of washi papers on the market are made by machine.

Among them, Echizen-washi(越前和紙) in Fukui Prefecture, Mino-washi(美濃和紙) in Gifu Prefecture and Tosa-washi(土佐和紙) in Kochi Prefecture are known as three major producers of Japanese washi paper.

﻿ ﻿
The Japanese washi paper has been used to repair cultural properties such as paintings, ancient documents and prints around the world because of its softness and durability.
Thin washi papers such as ganpi-shi are pasted up on the worn and battered papers. You can see the old papers through pasted washi paper.
Thick washi paper is used to patch disbound pages or reinforce seams of books.

﻿ Tengujo-shi (典具帖紙) is a type of Japanese washi paper which developed in Tosa(土佐, now Kochi Prefecture). It is made from kouzo and is called "the wing of mayfly".
This paper is transparent.

﻿﻿ This type of washi paper was used to restore the painting which Michelangelo painted on the wall of the Sistine Chapel in Vatican.
﻿
﻿The paper also served for the restoration of ukiyo-e and boooks at the Museum of Fine Arts in Boston.

There are many types of Japanese wash paper. I have only few types of them.

﻿
﻿
This paper is transparent. 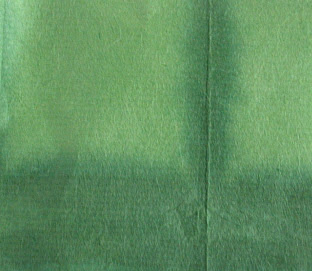 this pattern is made via pressing paper between carved boards.
This type of washi is called Itajime(板締め). 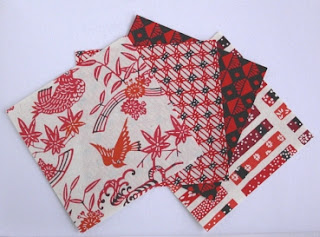 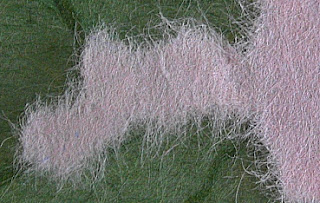 Compared with paper made from wood pulp, Japanese washi paper have longer fiber. You can fluff edges of washi paper by tearing with hands.


Chigiri-e(ちぎり絵) is a kind of torn paper collage. Fluffy edge make the collage look like a watercolor painting.

A paper patchwork called tsugigami(継ぎ紙) was popular in the Heian Period.  Nobles preferred writing papers made by splicing together straight or squiggly cut pieces of various washi papers.

﻿
﻿﻿ ﻿﻿ ﻿
On February 15th in 2011, the Kyoto National Museum announced that it made a new discovery about the picture scrolls called Caricatures of Animals and Humans (鳥獣人物戯画, Choju-jinbutsu-giga).

The scrolls belonging to Kozan-ji temple in Kyoto were drawn from the 12th to the 13th centuries and have been designated a national treasure.

﻿ ﻿ ﻿ Pictures were originally drawn on both sides of paper about one of the scrolls and the paper was divided into two sheets by peeling away a layer of the paper.  It is thought that the scroll was originally a practice piece.


﻿
This technique is called aihagi(相剥) and is used to divide one ink-wash painting on washi paper into two paintings. This is possible because Chinese ink seeps down into the washi paper and washi paper has many layers. The lower layer of the paper is lighter in color than the upper layer, but it's not fake.

1. Steam and unbark branches of Kouzo or Mitsumata trees after harvesting them from November to January.
2. Soak the bark in water overnight.
3. Scrape off dark outer bark with a knife.
4. Immerse white inner bark in ice water or expose it to the sun. In snowy regions, place it on the snow.
5. Boil it for 2 or 3 hours.
6. Nervously remove the dirt by hand after washing it with water.
7. Make pulpy material by beating it with a wooden hammer or the machine.
﻿﻿﻿﻿
﻿﻿﻿﻿8. Scoop wet, pulpy material containing extracts from aibika's roots with a wood-framed bamboo(or reed) screen and shake the screen to spread the material. Make paper by repeating this procedure several times. Stack the wet paper in layers.

9. Squeeze out the water from stacks of the paper by presser.
10. Peel a sheet off of each stack and put it on board.
11. Dry sheets of paper by exposing them to the sun.
12. Sort and cut out them.

Raw material producers are aging. Most of them harvest and process plants for the material on the side during agricultural off-season, but the plants require increased care need to be looked after from spring to summer.  These works place a burden on them.
投稿者 ichinen 時刻: 1:50 AM

Email ThisBlogThis!Share to TwitterShare to FacebookShare to Pinterest
ラベル: CRAFT_paper