SENDAI Pageant of Starlight and The Kanji of the year 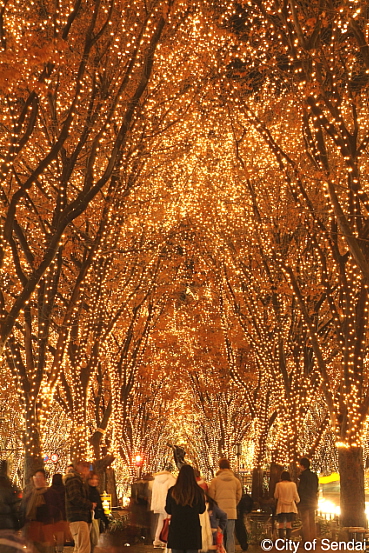 SENDAI Pageant of Starlight(SENDAI光のページェント) is an annual illumination event that citizen volunteers started in 1986.

Fundraising from citizens and donations from companies constitute more than half of the operational expenses.

It's being held near Sendai Staion from December 2nd to 31st. 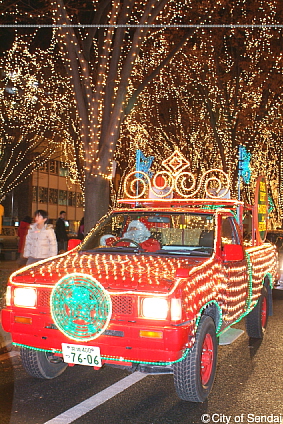 All of 550,000 LED bulbs has become unusable because their storage warehouse was engulfed by the tsunami in March, so many people were afraid of holding the event.

The event collected more donations than usual this year. The organizations of illumination events including Omotesando in Tokyo, Sagamihara City in Kanagawa Prefecture, Hiroshima City and Odate City in Akita Prefecture are lending the light bulbs to the Sendai's event.
The organizers of the event secured 460,000 light bulbs and managed to hold the event. 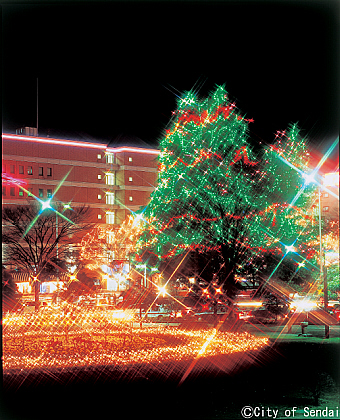 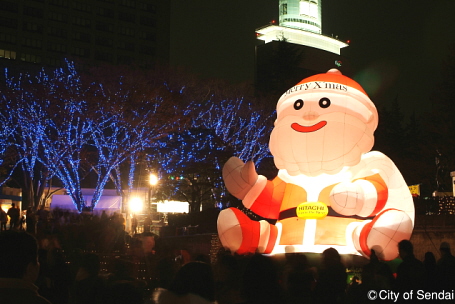 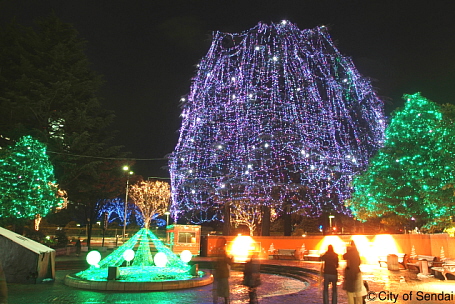 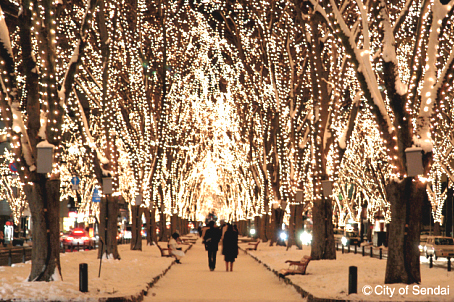 
The post offices throughout the country started accepting New Year's postcards for 2012 on December 15th. They will be delivered on or after New Year's Day. Recently, we can also buy and post them on the Net.

It's a custom in Japan to write this phrase on New Year's cards, "Akemashite Omedeto(明けまして おめでとう, Happy New Year)." People in the affected areas are not in the frame of mind to celebrate the New Year even if they didn't suffer any damage from tsunami. On one hand, many of tsunami victims lost their address books with their household goods. They would like their acquaintances to  send them the cards.

So many poeple write New Year's cards without the phrase to express their appreciation for people's support or to catch up on each other's lives.


Takatamatsubara(高田松原) in Rikuzentakata City, Iwate Prefecture was a scenic spot where 70,000 pine trees and sands stretched over 2 km along the sea. The pine trees were swept up by the tsunami, and one of them was left alone.

Finally the only remaining 260-year-old pine tree died due to salt damage by tsunami although it sprouted in July. However, three grafted seedlings and 18 seedlings from pinecone of the tree are being raised.


The Japanese Kanji Proficiency Society (財団法人日本漢字能力検定協会) announced the Kanji of the year (今年の漢字 Kotoshi no Kanji) representing a sign of the times on December 12th.

"Kizuna(絆, Bonds)" received first-place votes in balloting. Many people selected this character because of the Great East Japan Earthquake on March 11th.

The chief abbot of Kiyomizu-dera Temple(清水寺) wrote this character on a large piece of washi paper with a brush at the temple in Kyoto.
投稿者 ichinen 時刻: 10:22 PM