These are everyday confections, so they're not served at social events such as tea ceremony. 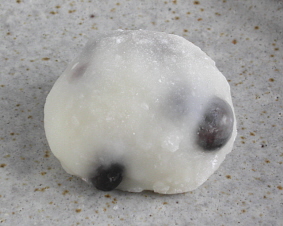 Mame-daifuku(豆大福)is a round glutinous rice cake stuffed with boiled lightly-salted red peas and adzuki bean paste. Kuromame-daifuku contains kuromame(黒豆:black bean) instead of red peas. Kuromame is a variety of soybeans and is often served as one of the ingredients of New Year's dishes. Kuromame from Tanba Sasayama(丹波篠山) in Hyogo Prefecture is very delicious.

Mame-daifuku is a version of daifuku(or daifuku-mochi), which was created in 1772 and became popular among common people.
Daifuku's surface gets crusty a day after being made, but most of daifuku available at supermarkets don't so. 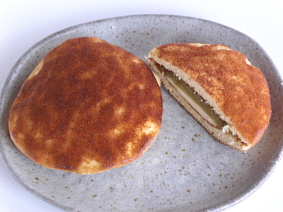 This is a version of dorayaki. (Refer to previous post about dorayaki)

Karinto is a traditional deep-fried confection made of wheat. It's unclear what the name means.
Some people say it was brought by Japanese envoys to Tang Dynasty China. Another theory suggests it derived from Portuguese or Spanish confectionery introduced in the latter half of the 16th century.
The confection came to be popular among common people during the Edo Period.

"煎餅" appears in an ancient document written around 737, but it was called Irimochi which was made by frying kneaded flour and differed from modern Senbei.
According to a theory, Kukai (空海, 774–835) who was a Japanese monk introduced a method of making tortoise-shaped Senbei to Japan from Tang Dynasty China.
Senbei is made from wheat flour or rice flour. Senbei made from rice flour such as Soka Senbei(草加せんべい) is common in Kanto Region.
Thin plate-like senbei can be served at a tea ceremony.
﻿
﻿
These were made by drying kneaded rice flour in microwave, toasting it on a baking rack and brushing soy sauce on it. Originally, the dough is dried in the sun.

Okoshi was introduced from China to Japan from the ninth to the tenth century. Only the aristocracy could enjoy it at first. It spread throughout the country in the Edo Period.
"Kaminari-Okoshi(雷おこし)" of Asakusa, Tokyo and "Awa-Okoshi(粟おこし)" of Osaka are very famous.
﻿
﻿
These confections use rice flakes and the rice that was steamed, dried, broken up and roasted.
These are made by boiling down a mixture of water, roasted peanuts, sugar, mizuame, butter and salt, combining the mixture and the rice and forming them into a shape. They solidify in a very short time, so I had to finish them quickly. Mizuame(水飴) is partially degraded starch sugar.
投稿者 ichinen 時刻: 10:03 PM