A strong aftershock with a seismic intensity of a upper 6 occurred in Miyagi Prefecture around 11:32 p.m. on April 8th.  People in Tohoku Region headed for higher ground, but the quake didn't generate tsunami.

Although the electricity supply had restored in many areas, the quake caused blackouts again. Some train services in the region are suspended. Four died of shock and a ventilator's breakdown and 140 injured.

At the beginning of April, entrance and opening ceremonies are held in most schools in Japan. Most elementary students go to school with school bags named randoseru on their backs for six years.

A randoseru (ランドセル) is a backpack made of firm leather or synthetic leather. It usually costs more than 20,000 yen. When a child enters first grade, his parents or grandparents buy it for him.

Many randoseru were covered with mud in the devastated areas.
In one of the areas, many muddy randoseru are laid in a muddy school building. Most of these bags lost their owners. Some parents brought back their child's bag as a keepsake.

In another of the areas, a teacher washed some muddy randoseru and handed them directly to their owners, her students. Many residents were forced to evacuate some off-limits areas in Fukushima, so they left their children's randoseru.
Many new and old randoseru were sent to elementary students who lost or left their bags.

A person calling himself Date Naoto placed 10 new randoseru around the entrance of a children's consultation office last Christmas. Date Naoto is the main character of a Japanese manga "Tiger Mask". After being raised in an orphanage, he became a professional wrestler and donates money to the orphanage.

His Christmas present created a phenomenon to send school supplies to welfare facilities for children anonymously. Some people think the phenomenon is a fad. A girl in foster home said, "I'm glad to know that there is someone who cares about us in the world.". 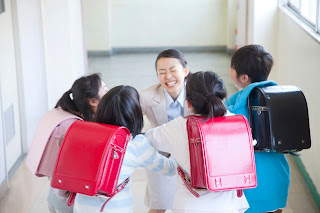 elementary students having randoseru on their backs