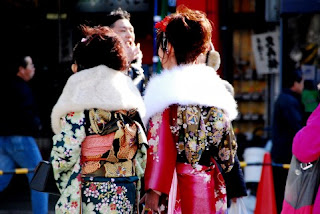 The second Monday of January is Coming-of-Age Day.  Coming-of-Age ceremonies were held in most areas. New adults have grown up after burst of the economic bubble. So they have never experienced a booming economy.﻿﻿﻿
﻿﻿﻿
Nishinomiya Jinja Shrine(西宮神社) in Nishinomiya City of Hyogo Prefecture is the head shrine that is dedicated to Ebisu. Its main gate is opened at six in the morning of January 10th and many men rush into the main hall to win laurels as "Lucky Men".
Top three men can get alcoholic drinks, a bag of rice and a statue of Ebisu.