Summer vacation in my childhood

Temperatures reached 35 degrees Celsius in Tokyo. Fire and Disaster Management Agency said the death due to heat stroke has risen to 132 from May 31th to August 15th in Japan. Hot summer is still far from over.

When I was a child, I spent my summer vacation at my grandmother's house several times. The house was in a rural area, about 30 minutes by a car from Kouchi Station.
Most people in my grandmother's village share a common family name although they are not relatives. They always left the door unlocked.

It was a Japanese-style house built about 100 years ago. The floor of each room was covered with tatami mats. It had elaborately-built reception room with a southern exposure and the room was usually used for welcoming guests. Its veranda-like porch called engawa was normally screened from the sun. It has also a small but well-mended Japanese garden.
On the other hand, its living space was humble. Old Japanese houses were designed with welcoming guests paramount in thinking.

Electricity was installed. She cooked with propane gas on the concrete floor and pumped water up from a well. We heated a bath by burning wood for fuel and used a vault toilet. It's too difficult to lie in nice hot bath because we can't lower the heat at a proper temperature.

The toilet and the bath were separated from the main building because the separate building got wet and rotted quicker than the main building did in Japan's humid climate.
We slept under a mosquito net with the window open. I often woke my grandmother and had her accompany me to the toilet during the night. I was scared of using the vault toilet in the night.

A large iron kettle-shaped bathtub called a Goemon-buro ("Goemon bath") was named after Ishikawa Goemon (石川 五右衛門, ?-1594), who was a legendary bandit and was executed by being boiled in oil.
It was installed in the bathroom and was heated on an open fire. We have to submerge ourselves in hot water while staying on a wooden board to prevent heated bathtub from contacting the skin. A child was too light to do it, so I and my sister rode on the board together.

I played with one of my cousins every day during my stay. My grandmother's house was an entertainment park for me. I never got tired of staying there, so I didn't want to go home.

Wood is suitable for the hot and humid climate in Japan.
Many people living in modern closed houses with less ventilation have a problem with propagation of mold, but it's cold in wooden houses in winter.

Traditional Japanese houses using high-quality woods last for hundreds of years by being maintained occasionally. Unfortunately, Building materials for my grandmother's house were not high-quality, so they rotted from within. My family demolished the house after my grandmother died at the age of 97. 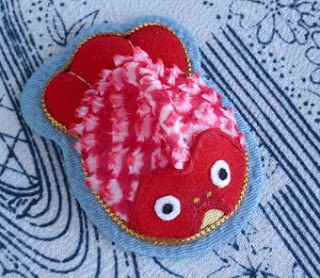 Email ThisBlogThis!Share to TwitterShare to FacebookShare to Pinterest
ラベル: CRAFT_chirimen, others