"Natsu Matsuri Naniwa kagami(夏祭浪花鑑)" was written by Namiki Senryu(並木千柳), Miyoshi Syouraku(三好松洛), Takeda Izumo Ⅱ(二代目竹田出雲) and was premiered as a bunraku play in August in 1745, as a kabuki play the following month. It was based on an actual incident that A fish peddler had a fight with a habitual gambler and killed him.

This play is a regular performance in summer, along with "Ise-ondo Koi no Netaba(伊勢音頭恋寝刃)".
The highlight of the play is a scene of a lead character killing his greedy father-in-law because of persistent invective.
With the festival music including the sound of drumbeats and bell jingles, Danshichi kills his father-in-law Giheiji in mud (in kabuki, real muddy water is used) during the summer festival of Kouzu-gu(高津宮) shrine in Osaka.

However, what surprised me most was an action taken by Tokubei's wife, Otatsu(お辰).
Her husband Tokubei(徳兵衛) is yakuza (gangster). When she visits his peer Sabu(三婦), Subu's wife asks her to shelter a young man, Isonojou(磯之丞). But Sabu expresses concerns Isonojou may hook up with Otatsu because she's sexually attractive.
Surprisingly, she holds a red-hot poker against her face by herself and said, "Do you still think I have a sexy look?"

We think that she doesn't need to go to such lengths.
Yakuza were incredibly loyal while being belligerent. They were willing to die for their benefactors. She is the prototype yakuza's wife of modern yakuza movies.

The summer festival of Kouzu-gu is still held on July 17th and 18th every year. 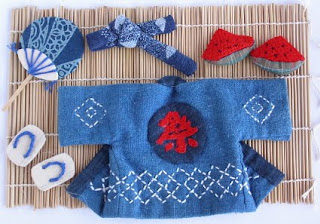 hanten(半纏:traditional short coat as worn at festivals), setta(雪駄:leather-soled sandals), obi(帯:obi sash), hachimaki(鉢巻き:headband) and watermelon.
Hanten is stitched with an embroidery technology called sashiko(刺し子) which has been used for keeping warm and reinforcement of cloth.