The Aoi Matsuri (葵祭:Wild ginger festival), which is formally called Kamo Sai(賀茂祭) , is held on May 15th in Kyoto, Japan.
People dressed in historical costumes parade from the Imperial Palace through Shimogamo Shrine(下鴨神社) to Kamigamo Shrine(上賀茂神社) in a one-kilometer procession. 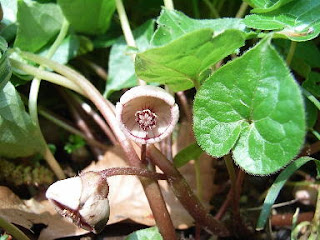 Aoi(葵:Wild ginger or Asarum caulescens) is a shrine crest of both shrines.
People, even security staff, wear Wild ginger leaves in their hairs to meet deities on this day. In old Japanese, "Aoi(葵,あふひ)" is the same hiragana characters as "visiting day(会ふ日,あふひ)".

Kamigamo Shrine, where the deity of thunder is worshipped, is the shrine of the guardian deities of the Kamo family.
A raging rainstorm did some serious damage in the middle of the sixth century. In accordance with a fortuneteller, the family began to hold a festival that they gallop atop their horses before the deity to appease the wrath of the deity.

The deity is pleased to see galloping horses, so the family has held the festival every year since then.
Although the members of the Kamo family are scattered all over the nation today, they group together to hold the festival during this period. Now, the festival is held in early May as part of the Aoi Matsuri. The riders head the procession on May 15th.

Shimogamo Shrine, a World Heritage site, is located in the forest called Tadasu no Mori (糺の森), which is the remnant of a primeval forest. Shinto is an indigenous religion based on the worship of nature. As a result, the precincts of shrines or worshipped areas such as mountains have long been protected.

Mother-deity and grandfather-deity of the Kamigamo Shrine's deity are worshipped at the shrine.
Mikage Matsuri(御蔭祭) is the most important festival to Shimogamo Shrine. On May 12th, it's held to welcome the deities that are born again once a year.
At Mt.Mikage-yama, the shrine's priests offer fruits of the sea, riches of the soil, confections, rice and alcoholic beverages to the deities. One of them calls for the deities in the voice that speak without words.

Putting a little white box containing the deities on the back of a horse, they go to Tadasu no Mori. There, dance and music performance are held to entertain the deities.


Both shrines have been located before the capital was moved to Heian-kyo(now Kyoto's city center) in 794 by Emperor Kammu.
A suite of the emperor went in procession to the shrines to show respect for the deities. This was the beginning of the Aoi Matsuri's procession.

They greet the deity at Shimogamo Shrine and use articles for presentation to pay tribute to the deities. One of them as Imperial messenger reads the emperor's letter.

Then, they go to Kamigamo Shrine and make the deity a present of a horse. The members of the Kamo family ride horses at the shrine.
Before night, they do it again at the foot of the mountain near the shrine.
投稿者 ichinen 時刻: 1:26 AM