Ume-Matsuri(Japanese apricot festival) is held from February 8th to March 8th at Yushima Tenmangu Shrine(Yushima Tenjin) in Tokyo. Although several precocious varieties of ume(Japanese apricot blossom) are in full bloom, other varieties have only partially blossomed so far.

Although this shrine was build to worship a deity of Shinto, later Sugawara Michizane(菅原道真) became worshiped together. He was celebrated as a scholar and also was a powerful politician. After getting involved in a political battle, however, He was demoted and transferred to Dazaifu in Kyushu on January 25th in the lunar calender(February 16th in the Julian calendar) in 901. It was very hard for him to leave the ume blossoms in his garden. So he composed the following waka poem for the love of the ume blossoms before his departure.

"ume blossoms, when the wind is in the east,
carry the smell of you all the way to me on the wind.
even if I'm not here, never forget to bloom in spring."

Legend has it that the ume blossoms in his garden followed him to Dazaifu in the air.

He came to be worshipped as the god of learning after his death.
By now, Many students taking entrance exams should have prayed to him for a wish to come true. 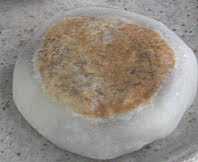 yakimochi(焼餅) :
This is the same confection as umegae-mochi. Yaki-mochi isn't just marked with ume design.
Umegae-mochi is a rice cake filled with sweet bean paste and a ume design is stamped on top. Its name is derived from an episode of Sugawara Michizane. But it doesn't taste and have smell like ume. Umegae-mochi is often sold around Dazaifu. 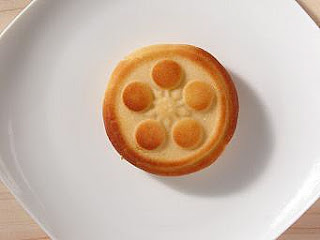 momoyama(桃山) :
momoyama is a moist and relatively new confection. It is forced into the mold and baked in an oven. Although momoyama is not related to ume, I happened to notice that its mold is the shape of "umebachi-mon", which is the same as the shrine crest of Yushima Tenjin. Other Tenjin shrines have the crests associated with ume.

Today, family crests can be seen on black ceremonial kimonos or on the gravestones.
The following paper cutouts are modeled after a variety of ume designs. Paper cutouts like these are called monkiri-asobi.
It is a play in the Edo Period, which derived from how-to book on making family crests. 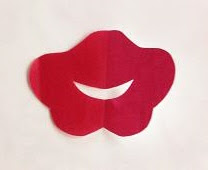 hyugatsumegata-kourin-ume(日向爪形光琳梅):
a ume design that would appeal to Ogata Kourin.
It's generally called warai-ume, which means "laughing ume". 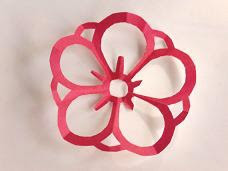 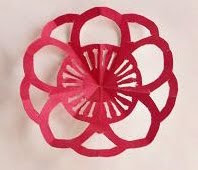 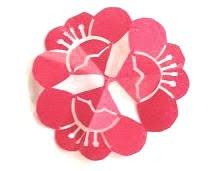 mitsuyori-yokomi-ume(三ツ寄横見梅) :
a design of three ume from a lateral view 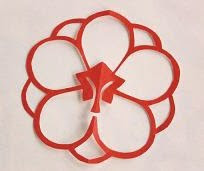 kageno-yae-uraume(かげの八重裏梅):
a design of ume being looked up from underneath