In the late Edo Period upper-class women created crepe crafts using leftover kimono cloth. The crafts include pouches, stuffed animals and toys.
The pouches were used as a scent bag or a pick case of koto(琴:a traditional Japanese stringed instrument). As the number of kimono sewers come down, the crafts had been forgotten. Because they were made as one of female accomplishments and were not marketed.
Shigeyoshi Inoue, current director of The Japan Toy Museum in Himeji, tried to revive them. Now it is popular among fancywork lovers. Many works are remade based on old ones, but include original ones. Recently its works were displayed at the exhibition in other countries outside of Japan. 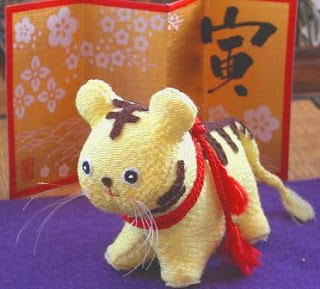 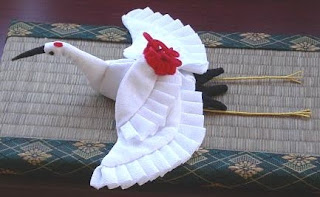 飛び鶴袋(Tobizuru-bukuro:pouch in the shape of flying crane)

This knot on the back of the crane represents a Japanese apricot blossom. 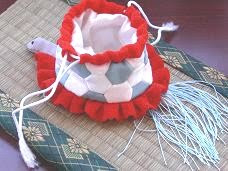 蓬莱亀袋(houraikame-bukuro:pouch in the shape of turtle):
Blue threads represent algae growing on the turtleback of an old turtle.
So they are considered as a symbol of longevity. 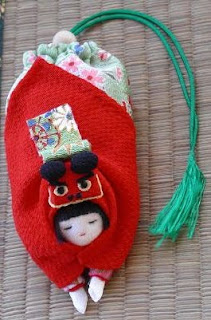 越後獅子袋(echigojishi-bukuro):
In ancient times, a group of boys came from Echigo(old Niigata) to big cities like Edo(old Tokyo) or Osaka in the New Year season. They put on red lion masks and performed on the streets under the leadership of their boss.

Email ThisBlogThis!Share to TwitterShare to FacebookShare to Pinterest
ラベル: CRAFT_chirimen