Chrysanthemum festivals are being held throughout Japan.

Chrysanthemum flowers was said to be at their peak four or five days after Rittou(the first day of winter, November 8th this year.)
﻿﻿
﻿﻿
﻿
﻿ ﻿﻿
Atsumono(厚物)

Atsubashiri(厚走り)
Long petals radiate out from the underside of spherical flower heads.
﻿
﻿
this photo by 高画質壁紙写真集無料壁紙

Small type of atsumono. Top-heavy chrysanthemum is like a Fukusuke Doll.


Ozukuri(大作り)
pinching a single plant repeatedly to make it branch out and making up it in a semi-spherical shape, a gardener produces several hundred flowers. In Shinjuku Gyoen, three plants with flowers between 565 and 627 were displayed last year. This method was started in 1884.
﻿﻿
﻿﻿
Senrin-zukuri(千輪作り) is modeled after Ozukuri.

﻿﻿﻿
﻿﻿﻿
There is a Senrin-zukuri chrysanthemum with three-colored flowers at Nihonmatsu Chrysanthemum Dolls.

Nihonmatsu Chrysanthemum Dolls(二本松の菊人形) is a chrysanthemum show held in Nihonmatsu City, Fukushima Prefecture.
Due to the quake, the period of the show is shortened (from October 15th to November 13th ) and admission is free this year.


In the Edo Period, "100-variety chrysanthemum(百種接分菊)" was made by grafting 100 different varieties of chrysanthemum onto a single plant. It appears in the ukiyo-e of Utagawa Kuniyoshi(歌川国芳,1797-1861).
You can see this chrysanthemum at Hamamatsu Flower Park in Shizuoka Prefecture from early November to early December. The park's Web page shows this chrysanthemum.

Ise, Choji and Saga-giku are classical varieties of chrysanthemums.


Isegiku is like a shaggy pom pom and was cultivated in Ise area(present Mie Prefecture.)

It has anemone type flowers.

Choji(丁子) means clove. It's called Choji-giku from its resemblance to clove flowers. One flower in the center is surrounded by six flowers. 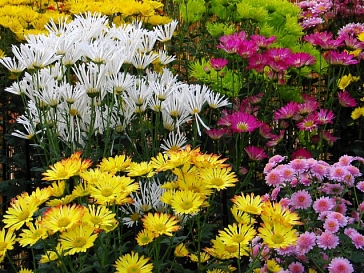 
It is said that Emperor Saga(786-842) planted this chrysanthemum on the grounds of the Imperial Palace in Sagano, Kyoto.
It's like an upside down broom. 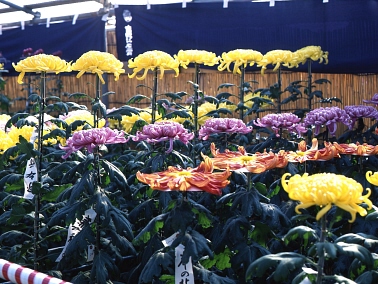 Ichimonji-giku(一文字菊)
(chrysanthemums second from the right)

It's a single-petal chrysanthemum more than 20 centimeters in diameter. It has around 16 petals.


Shinjuku Gyoen Kikka-ten (Chrysanthemum Exhibition) is being held at Shinjuku Gyoen National Garden in Tokyo between 9 a.m. and 4 p.m. from November 1st to 15th. The admission fee is 200 yen for adults and 50 yen for middle school students and younger.

Seven exhibit booths are set up in its kaiyu-shiki(circuit style) garden and chrysanthemum flowers are displayed in a traditional Japanese way.

The following web pages introduce last year's exhibition at Shinjuku Gyoen. (The characters may be garbled because the text is written using Shift JIS code as a character set.)