The Soma Nomaoi(相馬野馬追) is a festival and shrine ritual held in the Soma area in Fukushima Prefecture from July 23rd to 25th.
Although the festival is not very well known in the country, it went on an expedition to foreign countries including the United States, the UK, Russia and Brazil.

It is said the festival originated from a military training from Taira no Masakado(平将門, ?-940). He used wild horses in place of enemies and trained soldiers for battle. Then he offered captured horses to a shrine.
It has been designated a significant intangible folk cultural asset of the country.

Three shrines and five villages in the Soma area take part in the festival. Samurai cavaliers dressed as if from a period of provincial wars head for a rendezvous point through a national road and rice fields.

The Soma area was damaged by the earthquake and tsunami on March 11th and includes the nuclear evacuation zone.  Many of horseback riders lost their family members, houses and horses. About 200 of 370 horses which had been kept for this festival in the area were left dead or missing by the tsunami.  Many people doubted whether the festival could be held and the organizers discussed carefully whether to hold it. However, local people have strong feelings for the festival.

Although about 500 riders with their horses participated in this festival each year, participants in this year's festival are only 80 of them.
The festival is being conducted at a reduced scale. The highlight of this festival, armor horse race(甲冑競馬, Kacchu-keiba) and competition for sacred flag(神旗争奪戦, Sinki-sodatsusen), are held on the second day of the festival, but they are cancelled this year.

Wild horse chasing(野馬懸, Nomagake) is a Shinto ritual that comes from offering captured wild horses. Usually the chasing is held at the Soma Kodaka Shrine(相馬小高神社) on the third day, but the shrine is located in the exclusion zone. So this event is held at Taka Shrine(多珂神社) on 25th.

On the second and third day, events will be held within a 30-kilometer radius of the nuclear plant. The organizers say it's unadvisable for visitors to go there. 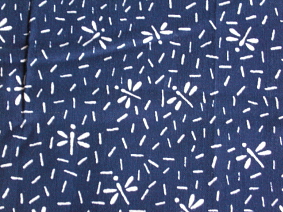 I saw a dragonfly yesterday. The dragonfly was esteemed as an insect of victory by members of the samurai class because the insect goes only forward and never goes back. Dragonfly patterns are seen on outfit for battle such as armors, sword guards and battle surcoats. The patterns can still be seen on outfit for kendo(Japanese fencing).
投稿者 ichinen 時刻: 5:13 PM