Dogs visited shrines on behalf of their owners(2)


10. Japanese wolf as the deity

According to an article in National Geographic(2012), Shiba-inu(a Japanese dog breed) and wolves are closer genetically than other breeds of dogs and wolves. In Japan wolves were called Yama-inu(wild mountain dogs) in the past.
Musashi-mitake Jinja Shrine located at the top of Mt. Mitake has enshrined a Japanese wolf as the deity “Ooguchi Magami”. According to Chronicles of Japan, a white wolf led the way when Yamato Takeru no Mikoto(a Japanese legendary prince of the Yamato dynasty) got lost. The wolf commonly known as Oinu-sama has been an emissary or a subordinate to a deity.
Oinu-sama has been enshrined as a guardian deity of mammalian pest control, fire and theft protection, protection against every accidents. Though meat-eating was officially prohibited on several occasions in Japan, game meat was available. There was very little livestock farming. So wolves benefited arable farmers. They got rid of deer, bear, wild boar, hare and other hungry animals which can ruin a crop.

The shrine is also dog friendly. Visitors can request a prayer specifically for dogs. Amulets for dogs are available.

Musashi-mitake Jinja's goshuin-cho(goshuin note)
Go-shuin means a seal stamp given to worshippers at Shinto shrines and Buddhist temples in Japan. Go-shuin includes information such as the name of the temple and the date of visit written in calligraphy. 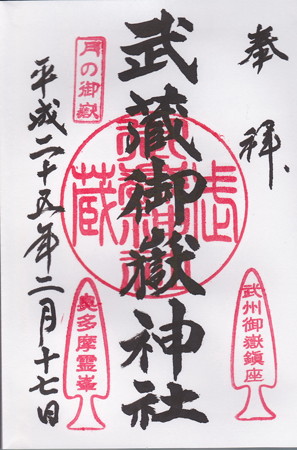 
It will be an 10 minute bus ride from Mitake station(JR Ome Line) to Takimoto Station(Mitake Tozan Cable). After 6 minutes funicular ride visitors arrive at Mitakesan Station. The shine is  25 minutes walk from the station. Each funicular car has a space for dogs.

Around the shrine there are 26 Shukubo(pilgrim's lodging) that date back to the Edo Period. Shukubo are popular with worshippers, climbers, and hikers. 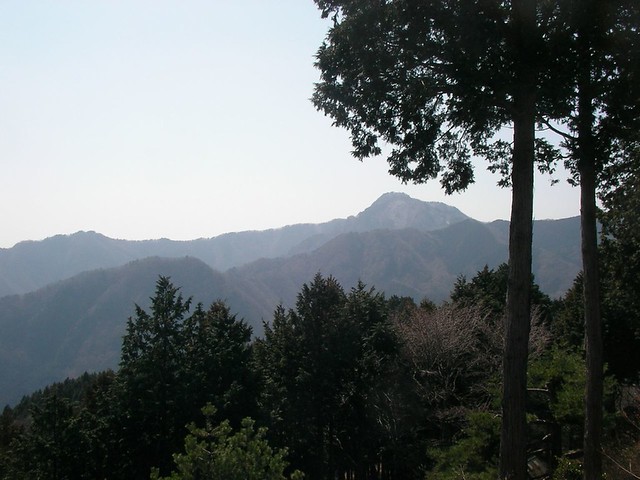 Yatsumunemokutodai (八棟木灯台) is a decorative wooden lighting fixture built in 1857.

Okariya(The shrine of "Ooguchi Magami", the wolf deity)
Okariya literally means a temporary shrine. Rituals dedicated to the wolf deity are performed here because the deity usually remains sequestered in the mountains.

Stone lanterns stand on either side of front approach

Okumiya (Inner Shrine) of Mitsumine Jinja is located at the top of Mt. Myohogatake and is 90 minutes walk from the front shrine.  Please note that bears may frequent the area.


Komainu (狛犬, lion dogs) derives from Chinese guardian lions. A pair of komainu are placed either at the entrance of Shinto shrines, or somewhere inside. At the shrine, a variety of guardian wolf statues stand instead of lion-dog ones hither and thither.

Most statues wear bibs offered by believers.  It is said the bibs come from a prayer to Jizo(地蔵, Ksitigarbha in Sanskrit).  Though his mission is to save people between Buddha's death and the appearance of Maitreya(弥勒菩薩, Miroku-bosatsu), Jizo is also regarded as the guardian of children because he saves dead children who have to pile stones endlessly like Sisyphus at the banks(Sai-no-kawara) of death's river (Sanzu River.) The children can't cross the Sanzu River because they predeceased their parents. Ogres unpile the stones before the children complete a tower, but Jizo gives the children salvation in the end.

It's thought that parents whose child died started to offer bibs in prayer to Jizo for their child. This is considered as the beginning of statues wearing bibs in Shinto shrines and Buddhist temples.

Mention dogs, and "the dog shogun" Tokugawa Tsunayoshi comes to mind.  Tokugawa Tsunayoshi (徳川 綱吉, 1646-1709), the fifth shogun of the Tokugawa Shogunate, is known for  the Edicts on Compassion for Living Things (生類憐みの令 Shoruiawareminorei). He prohibited the killing of living things including humans. The law was a series of bans.

He made an extensive dog shelter with an area of approximately 990,000 square meters in Kakoi-machi(former area around Nakano 4-chome, Tokyo).  The shelter had five-part fenced-in grounds and each part had a doghouse, a feeding ground, a bower, a puppy breeding facility. About 80,000 dogs had lived there between 1695 and 1709. Some veterinarians and officials were assigned there.

Dog statues stand in front of Nakano City Office where the dog shelter used to be.

In recent years, Tsunayoshi has been re-evaluated as an exceptionally talented policymaker. At the time, Japan had a savage atmosphere in the post war period. He tried to change people's consciousness so that they were attracted towards non-violence and had moral fiber. The law aimed to show mercy to living things including humans.

In Edo(former Tokyo) a lot of feral dogs roamed the streets. They often did harm to people. On the one hand, some people killed them, and some gangsters ate dog meat. Tsunayoshi housed them in his dog shelter.

Sick cattle and horses were abandoned. Samurai often injured horses to improve their appearance.  He banned abandoning and injuring them. Animal shows by snakes, dogs, cats, and mice were banned.

"Living things" included humans. At the time many children and very sick persons were also abandoned. He strictly prohibited abandoning them. Additionally, he promoted improvement of prison environments. He obligated people to register the names of pregnant women and children aged seven or under, the numbers and owners of dogs, cats, cattle, horses and firearms.

The shelter's dogs were fed by taxpayers' money. People were deeply frustrated with his overly tight control for the protection of living things including dogs, cats, birds, fish, shellfish, and worms. However, it it said that his retainers expanded the ban to include all of living things. After his death, the shelter was demolished and most of the bans were abolished. The bans against abandoning cattle horses, children and sick persons remained.

When an apartment caretaker of Nagaya(one story tenement house) found an abandoned child in front of his apartment, it was his duty to find homes for the child. Stone notice boards called Maigo-ishi were built along the busy streets in Edo.  Handwritten notes posted on the stone let passersby know about homeless and missing children.