Typhoon Francisco and Lekima are moving to the northeast in the northwestern Pacific Ocean. Typhoon Francisco has brought drenching rainfall to many areas in Japan. Typhoon Wipha caused deadly landslides on Izu Oshima island on the 16th. The typhoon killed 31 people, and rescuers are still searching for 13 missing people. It disrupted traffic in Kanto Region.

In higher elevations, it snowed and the leaves are beginning to drop from the trees.

The Deer Antler Cutting Ceremony was held at Nara Park in Nara Prefecture on October 12th and 14th. Although male deer shed their antlers before winter and grow them back in spring every year, the event started in 1671 to prevent antlered deer from injuring people or another deer. They have no pain because nerves are not located in the mature antler. Antlers are dedicated to the deity. This event is held in accordance with ancient ritual, but the antlers of about 250 deer in Nara Park are cut from the end of August through March.


Visitors can see many deer around Nara Park. They are unafraid of humans, but they are wild animals. It's dangerous to come close to male deer in estrus and mother deer with fawns.


Their staple food is the native plants around the park. Many deer died of the human foods that tourists gave to them or of plastic food packages that tourists threw away. We are not allowed to feed them. The park has no garbage to prevent deer from accidentally eating them.


Only Shika-senbei(cracker containing rice bran and cereals) is sold as a snack by Foundation For The Protection Of Deer In Nara. The foundation is engaged in protection activity for them. A part of earnings from these cracker sales are used to protect deer.


The foundation operates Rokuen (Deer enclosure) for sick or injured deer, bucks that have potential for harming humans, aggressive rutting bucks, pregnant does and does with fawns. This facility was closed to the public, but the foundation turned to open it to convey to visitors the real state of deer in Nara last year.


Fawns are born in late May to early July at Rokuen in Nara Park. Visitors can see fawns for only a few hours from June 1 to 30 at Rokuen. Mother deer and fawns return to the park around mid-July. Mother deer are wary of human smells. It is best not to touch fawns.


For more information about Foundation for the Protection of Deer in Nara:
http://www.naradeer.com/  (Japanese version only)

They have been designated as a national natural treasure.  The deer is regarded as a messenger of the deities at the Kasuga Grand Shrine (春日大社, Kasuga-taisha).  They have been living there since before the shrine was built in 768.

The shrine invited Takemikazuchi-no-mikoto(the deity of thunder, the deity of war) from Kashima Jingu Shrine (鹿島神宮) in Ibaraki Prefecture as an enshrined deity of the Kasuga Grand Shrine. According to the legend, the divided spirit of Takemikazuchi rode a white deer to Nara with many deer.

At Kashima Shrine, the deer is regarded as a messenger of the deities because deer sent the message from Amaterasu(an enshrined deity of Ise Shrine) to Kashima Shrine's deity. There are about 30 deer in a deer garden of the Kashima Shrine.

From February to mid-March, Shikayose(Herding Deer by Blowing a Horn) is held at Tobuhino(飛火野) in Nara Park. When a player blows a horn, a herd of wild deer comes running up to the player to get acorns. The annual event started to herd deer in 1892 when a deer shelter was built in Nara Park.

Shikayose was held several times in July and August this year.

Except during the above period, visitors can enjoy this event for fee. Advance reservation is required.

The Deer Antler Cutting Ceremony was also held at Kinkasan in Miyagi Prefecture on October 6.
Kinkasan (金華山, Kinkasan or Kinkazan) is a small sacred island off the Oshika Peninsula in Miyagi Prefecture. The island is covered with primeval forest.  Wild deer and monkeys live there.

It's only the workers of Koganeyama Jinja Shrine(黄金山神社) who live in the island. The shrine was badly damaged by the Great East Japan Earthquake and a typhoon in 2011.


About 500 wild deer live there. The deer have been regarded as the messengers of a deity, so they are wandering around the shrine. After the antlers of about 15 bucks are cut, they have a medical checkup. Some people say that they are kind of shy compared with deer in Nara.

Even throughout Japan,  deer overpopulation is a serious problem. They feed on crops, garden plants and kill forest trees by feeding on young trees and the bark of trees, by rubbing antlers against trees.

A media reported on November 12 in 2012 that Nara Prefecture was considering to decrease the number of deer. Many people have strongly protested against the elimination of the deer.
Some people say that the Japanese deer should be exterminated to protect the environment from the deer. The prefecture was thinking about ways to reduce deer feeding damage, but deferred discussion on the matter.

Most longtime residents in Nara don't make a complaint about deer. Though they eat crops, plants in personal gardens, and trample on a flowerbed in a university near the park. The prefecture has received more complaints from newcomers.

Miyajima(Itsukushima) is an island in Hatsukaichi City, Hiroshima Prefecture. Itsukushima Shrine (厳島神社) on the island has been registered on the World Heritage List (cultural part) in 1996.

Some people say that deer have lived in Miyajima for 6,000 years. The natural foods supply has been limited in the island. They had searched for food by moving round the island. Only a few deer populations remained there. Miyajima residents cherished the deer as a messenger of a deity. They tried to increase their deer population. It has increased tremendously since the 1970s when a boom in tourism had taken place. They lost their natural wildness and got used to human habitats because tourists fed them human food. They may get sick, die or become malnourished due to human food. They have had negative effects on biodiversity in the woods near the town.

Hatsukaichi City urges tourists not to feed deer human food. The city tries to get them back to where they should be. Some people say that skinny deer are more common in Miyajima. Unable to stand by any longer, they feed starving deer acorns.

Yezo deer (Cervus nippon yesoensis) are indigenous to Hokkaido. The number of the deer has recently increased drastically. Their increasing numbers have caused a large number of deer-vehicle traffic accidents, have damaged to food crops, and have had negative effects on biodiversity. For now, hunting is the best way to control deer populations. The Hokkaido government is encouraging people not only to hunt but also to eat venison. We are unfamiliar with venison.

Kanoko(鹿の子) means a fawn. Kanoko pattern(white‐spotted pattern) was named after the fawn's spots although mother deer also have the pattern.

"Kanoko shibori" is one of the methods of tie-dyeing cloth regularly patterned like the fawn's spots. Shibori includes a number of labor-intensive resist techniques including stitching elaborate patterns and tightly gathering the stitching before dyeing, forming intricate designs for kimonos.

Kanoko is also the name of a Japanese confection.


Obiage is a scarf-like piece of cloth that covers up the obimakura(a small oval cushion) for keeping the upper part of the obi knot in place. Obiage is tucked into top of obi and is relatively big when kimono is dressed up.

Hanafuda (花札) is a Japanese card game with 48 cards. The name literally means "flower cards." It comes from the Portuguese word "carta" that came down to Japan in the 16th century. There are twelve suits. Each suit has four cards with a design representing each of the twelve months. 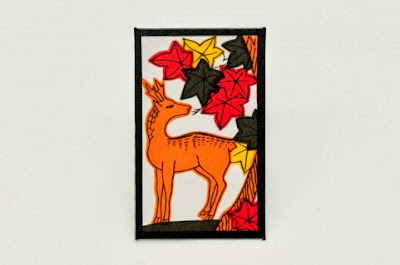 
The design of this card comes from the following waka poem by Sarumaru no Taifu(猿丸大夫). He was a waka poet in the eighth or ninth century, and is also known as Sarumaru Dayu. His date of birth and death is unknown.

Deep in the mountains, a deer makes his way through fallen maple leaves bleating for his wife.
His long plaintive cry brings on feelings of melancholy.