October is the season for newly harvested rice in Japan. We never miss a day without rice.
The emperor dedicates newly harvested rice to Amaterasu-Ohmikami, the Goddess of the Sun, at Kannamesai(神嘗祭) which is a festival held from October 15th to 17th. That festival used to be held on the 17th day of the 9th month in the lunar calendar.

This year, tsunami caused the rice paddies in tsunami-hit areas in Tohoku including Miyagi Prefecture to be harmed by salt. Less rice producers in the areas got good results in harvesting rice. They eliminated salt from salt-affected paddies by repeated drainage treatment.

Some people buy not new rice but old one for fear of radiation contamination this year. New rice from Fukushima is currently on the market because Fukushima Prefecture issued a declaration vouching for the safety of Fukushima's new rice after checking it for radioactivity.  However, the declaration can't address concerns over consumers.

A TV program named "Asaichi" checked all the meals that seven family members ate for seven days for radioactivity.  The program spent 2 hours checking using an accurate radioactivity detector after putting one day's meals for one person in the blender.

Unbelievers don't believe this result. Some farm producers make detailed inspections on radioactivity levels in their products and provide consumers with the results.
I'm not young, so I don't worry too much about radioactive materials.
Many people are in agreement on the point that the government should review the provisional standard values for food in Japan. 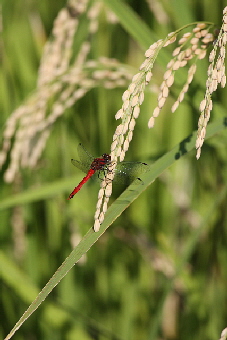 ears of rice and a red dragonfly

Red dragonfly is a feature of autumn in Japan. They go to cool highland areas to avoid the heat of summer and move to low-lying lands in autumn. 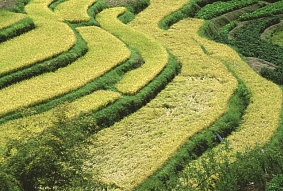 Tanada (terraced rice paddies along steep hills) is one of beautiful scenery, but it requires great care because much of the work is done by hand. Most of Tanada are preserved as a tourist spot.