Aerial fireworks are a feature of summer in Japan, but many fireworks festivals were cancelled or postponed due to the Great East Japan Earthquake this year. The Sumida River Fireworks Festival was also postponed until August 27th.
The festival started in 1733 as part of a ceremony to pray for the spirits of the victims of the great famine in 1732 and to drive away the evil disease.
This festival is broadcast live every year. I saw it on TV again this year. The river is surrounded by the overcrowded area, so the size of shells are restricted.

Omagari Fireworks Fetival in Akita prefecture is held annually on the fourth Saturday in Auguast. It's a national fireworks competition for pyrotechnicians started in 1910.

The competition includes "Daylight Fireworks", "Wari-mono using size 10 round shells" and "Creative Fireworks."
﻿﻿﻿
﻿﻿﻿
﻿ The first Japanese to get a patent in the United States was Jinta Hirayama(平山甚太), a pyrotechnician from Yokohama. His "Daylight Fireworks（昼花火, Hiru-hanabi)" was patented. he fireworks release colored smoke instead of sparks while emitting a sound.

﻿
Wari-mono(chrysanthemum type) are the typical Japanese fireworks which burst across the sky in a circle. They change colors while spreading in cirle and draw muti-layered concentric circles in the sky.

You can learn the details on the site "Japanese Fireworks".

﻿
In the Wari-mono section, contestants are required to set off two fireworks. One is a compulsory wari-mono with more than three-layered pistil that form a perfect sphere in every single aspect and the other is a variation or creative wari-mono.

﻿
"Chrysanthemum" and "Peony" are typical shells as compulsory wari-mono.

A size 10 round shell used in the competition has a diameter of 29.5 centimeters weighs 7.5 kilograms. The shell spreads in a circle with a diameter of 320 meters at 330 meters from the ground.


A size 40 round shell will be launched at Katakai Festival in Niigata Prefecture on September 9th and 10th. The shell has a diameter of 120 centimeters weighs 400 kilograms and bursts at 550 meters from the ground. It spreads in a circle with a diameter of 650 meters. 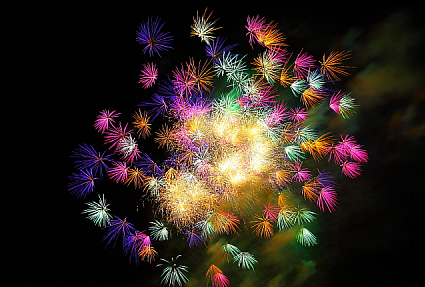 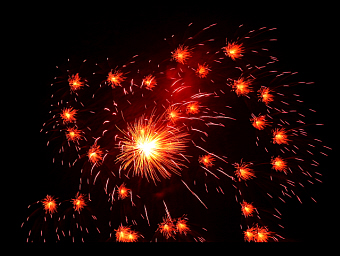 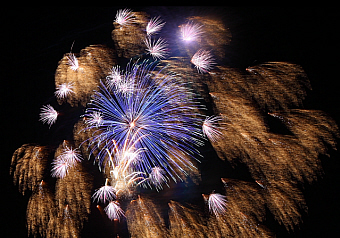 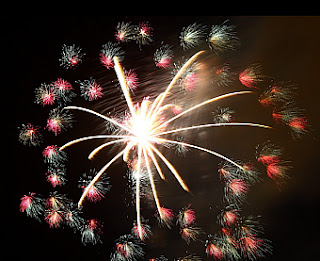 The fireworks include  Poka-mono such as  "Flash", "Jetting Comets" and "Bee and bee".


﻿﻿ ﻿﻿
In Creative Fireworks section, contestants are required to select starmine(quick-firing rockets) or rapid firing of size 8 round shells and set off up to 150 rockets to the music within 2 minutes 40 seconds.


﻿ ﻿
we could see various shapes such as cocktail glass, engagement ring, heart, the faces of cat, frog and rabbit this year. Christmas tree, snowman and hand-rolled sushi appeared at the last year's festival. 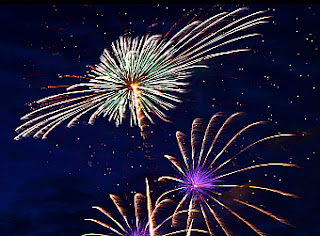 These fireworks have one major drawback. Their shapes are viewed clearly when it seen from the front, but they don't look like anything when seen from the other angles.

﻿﻿ ﻿﻿
2011 Wari-mono and creative fireworks by Isogai Enkaten(磯谷煙火店) (YouTube)
A man takes out a ring and asks a woman to marry him in a cocktail bar. 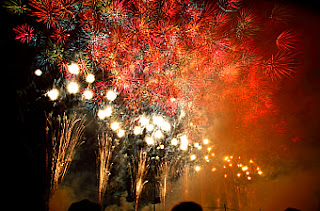 The organizers of the festival also present a firework show.(YouTube)
They represented the past glory of Hiraizumi in Iwate this year. 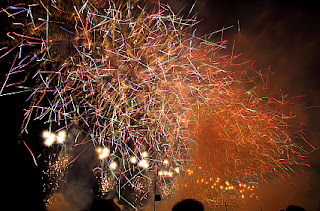